Home / How to ride the subway in South Korea 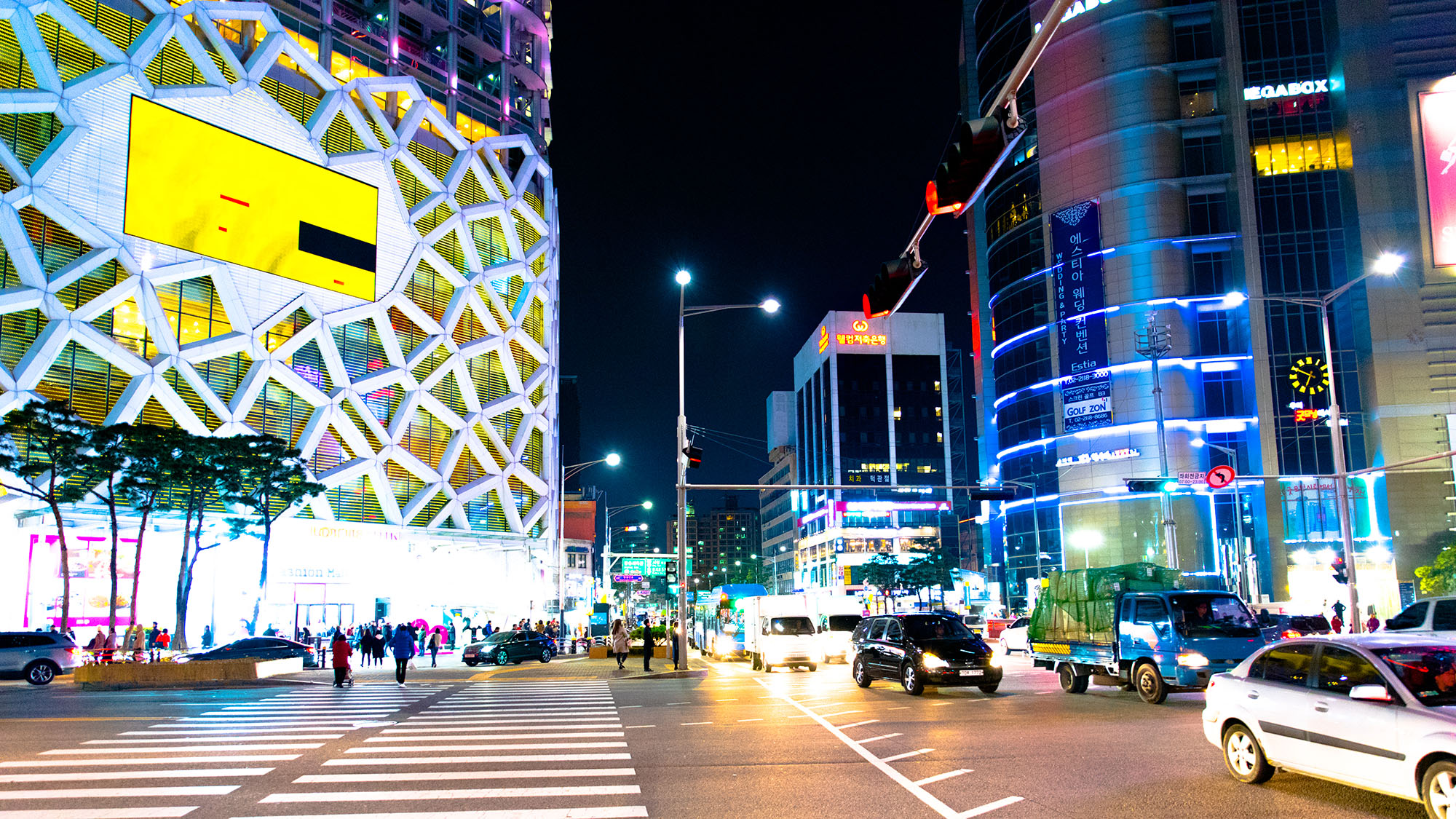 How to take the subway from the airport to downtown Seoul, South Korea.

Ride the BLUE Line out of ICN (Incheon Airport).

The Blue Line takes you straight from the airport to downtown Seoul.  Then at some point you may have to transfer Lines to get exactly where you want to be.

To ride the subway, you must purchase a "T-Money" card.  This is like a little paper credit card type thing.  You buy this card and put money on it / load it with money and use it to enter an exit the subway system.  You buy a 'T-Money' card at a designated subway booth, or at a Seven Eleven.  If you can't find a place to buy a card, just ask a local "Where can I get a T-Money card..." and they will point you in the correct direction.

The subway costs about a dollar per ride inside the city, but the airport route costs a little more.

The ride from the airport (ICN, Incheon) takes at least an hour on the subway, but is faster than the bus.  I took the bus on my way into the city and the subway on my way back to the airport.  The bus gets stuck in crawling traffic and took over two hours.

How to take a bus from ICN (Incheon) airport to downtown Seoul, South Korea

First off, these aren't city buses, they are coach buses specifically designed to take people to and from the airport which is about an hour and a half to two hours outside of downtown Seoul.

The bus costs more than the subway (about $14 USD) and will probably be a little slower.  But if you can't figure out right away where the exact transfer points are in the subway system, the bus is a good option and will drop you off right where you need to be.  The bus driver might be aware that you are out of your element, ask you where you're trying to go, and make sure you get off at your stop.

The buses pick people up right outside the airport entrance (follow the airport signs to get to this exit).

There is a Bus ticketing booth with a live person in it, or you can use a machine to purchase your bus ticket.

Here there is a map that shows all the bus drop off locations.  So make sure to buy a ticket that gets you to the right place, all the buses go somewhat different directions.

Once you have your ticket, look for the bus number on the ticket, then go stand in your correct line that matches that bus number.  The buses come about ever half an hour.

How to take the bus (in pictures) 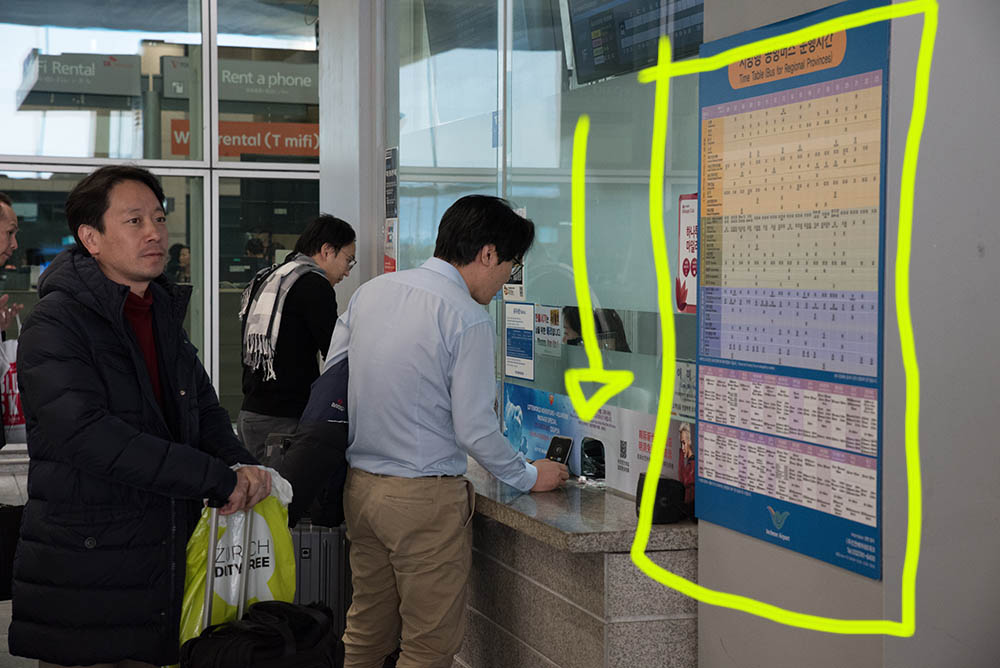 Talk to a human or look at this map to purchase a bus ticket to your destination. 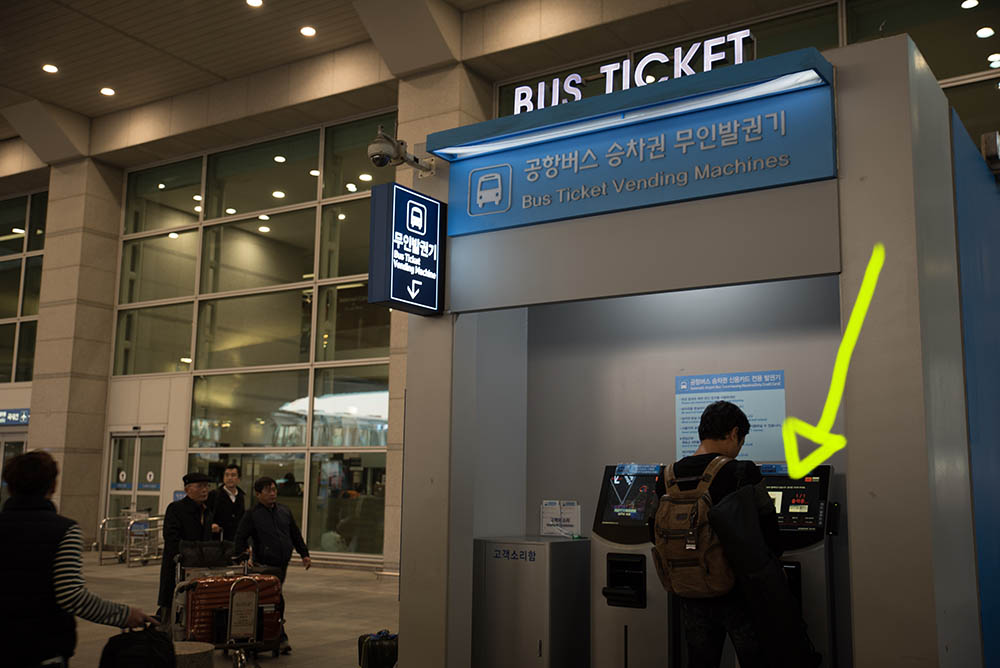 You can also buy tickets from this machine. 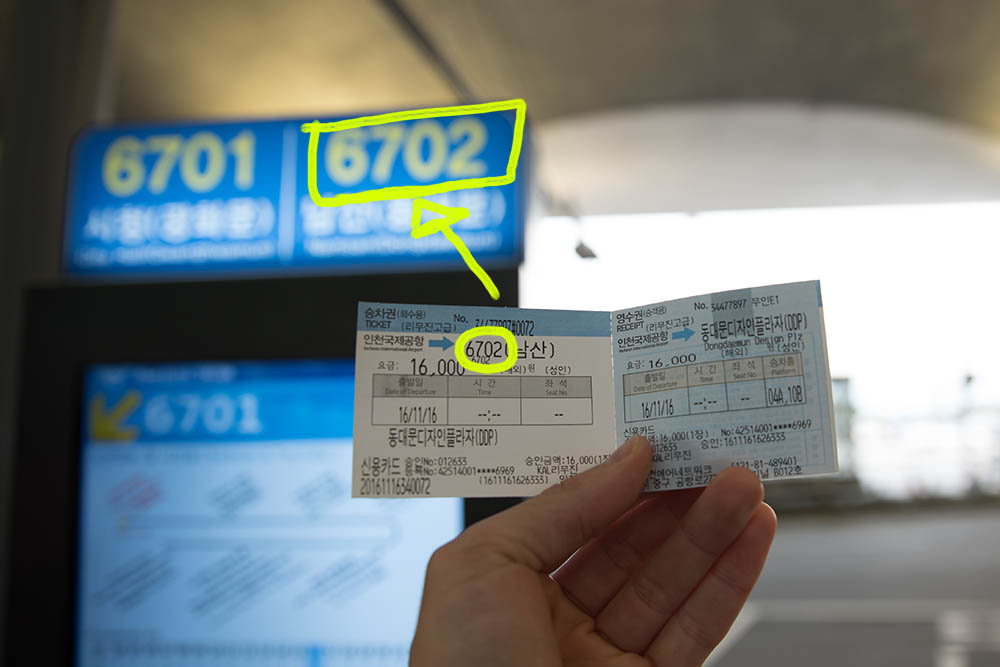 Match the number on your bus ticket with the bus number line. 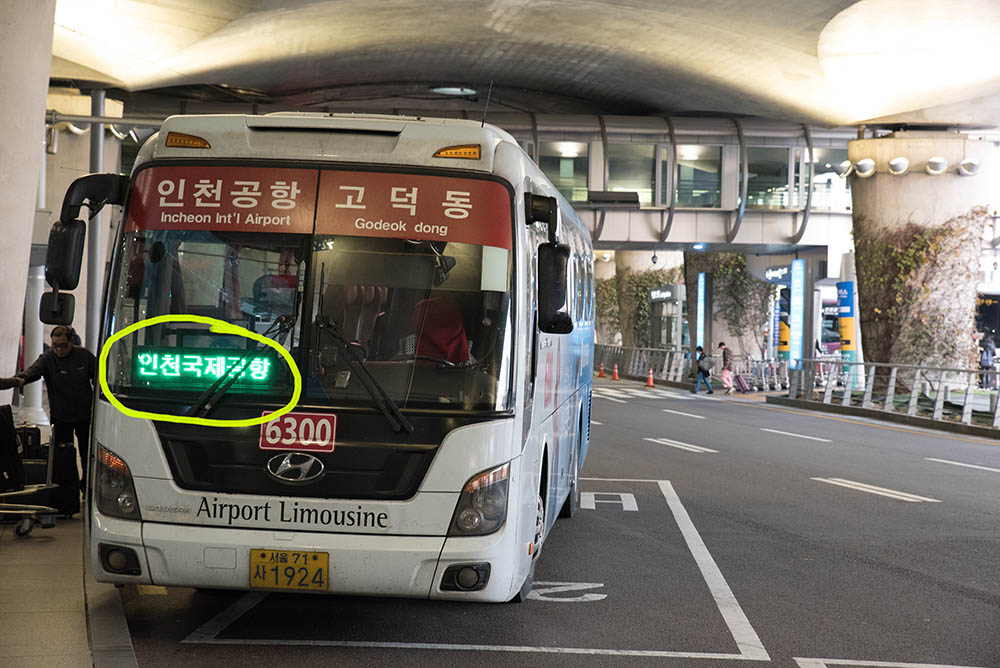 Wait for that bus number to show up, and hop on once it arrives.

Do people speak English in Seoul, South Korea?
Not so much.  I've been to a handful of countries at this point in my life, and in South Korea very few people seem to speak or understand much English.  For example, people understand and speak more English in Hong Kong than South Korea.  But you can still get away with pointing at things... Most of the younger generation in Korea can speak English.

What is the best way to convert money in South Korea?
Stick your credit card into an ATM, South Korean currency comes out.  Not many first-time travelers seem to understand this and they go to currency exchange booths and spend a bunch of money on fees.  You may need a card with a chip in it, most countries are moving to that type of card (not the US for some reason...)

Are the subways difficult to navigate in South Korea?
At first if you are new to using subways, it can be little tricky.  But like anything, after a while you get the hang of it.  Not much of the signage is translated to English (Paris, for example, has French words with English words below) so you have to be a little more visually observant.

How much does the subway in South Korea cost?
It's about a dollar per ride.  I think it costs more depending on the length or type of trip. The Trip back to the airport cost me extra, maybe because it was so long, or a special, more costly route than the regular subway routes in the city.

How to pay for the subway in South Korea?
You need this little card called a "T-Money" card.  You can buy these at little designated subway booths, or Seven Elevens.  Once you have the card, you can add more money to it at any subway.  Scan the card into machine, and insert Korean cash bills to add more money to your 'T-Money' card.  Each time you enter the subway, you scan this card to get in, and scan it on your way out - money gets subtracted.

How long does the subway take to get into the city (Seoul) from the airport?
Over an hour.

How long does the bus take to get into the city from the airport?
It took me over 2 hours when it got stuck in rush hour.