I landed alone at BKK airport in Bangkok at 10pm, got in a cab and went to a hostel 2 miles away to sleep.  The cab driver had no idea where that hostel was, (even though I had the address printed out in Thai) so I got wifi from the airport and had him follow my google map.   My friends Shay and Tyler were flying in from Taiwan the next day, so I decided to spend my day alone on Khao San Road.  I shared a taxi to Khao San Road with a new friend I met at that first hostel, his name was Ajay.  Me and Ajay hung out all day on Khao San, eating tons of Pad Thai and drinking too much beer later that night.  The next day I met Shay and Tyler at DMK airport and we all flew to an airport in southern Thailand called Surat Thani.  Surat Thani is the starting point to where you can take ferries to get to the islands of  Koh Samui, Kho Phan Ngan, Kho Tao or Phuket. (We were going to the first three, skipping Phuket).  We got off the plane in Surat Thani, bought some bus/ferry tickets at the airport, got on a bus, bus took us to the ferry dock, got on a ferry, and the boat took us to the first island of Koh Samui.  Koh Samui was an awesome island, and the biggest.  There are a million super sweet hotels to chose from, you really can't go wrong.  We got around the islands on our rented scooters, by far the best way to get around and super fun.  After two days on Koh Samui, we went back to the ferry dock, and bought a ticket to the next island, Kho Phan Ngan.  Kho Phan Ngan is the island that hosts the 'Full Moon Party.'  The full moon party was pretty cool, but probably would have been a lot better if I hadn't drank so much 🙁   We stayed on this island for 2 days as well.  There's not a whole lot to do on Kho Phan Ngan but party, though I guess if that's what you're looking for, this may be your favorite.  After those two days we bought a ticket to the final and smallest island of Kho Tao.  This ferry ride is the longest, and we cruised directly into the eye of a storm... We were on the top of the ferry getting pelted with rain, and getting tossed from our seats.  I was totally sea sick, which made Tyler turn sea sick, hah!  This last island of Kho Tao is the smallest and most natural of the three, the least amount of infrastructure, and not as many hotels as Koh Samui.  This island was awesome, and another great place to rent mopeds (we did).  There are some insane hotels, and some great snorkeling/diving spots.  If I were to do it again, I'd probably skip Kho Phan Ngan and spend more time on Koh Samui and Kho Tao.

Wow.  We have never experienced anything this awesome in our entire lives.  One of the hotels we stayed at literally made me feel like I was in Aladdin's palace.  The deals you can get on amazing 4 and 5 star hotels are out of this world.  The first place we stayed at cost $39 usd total, for a giant hotel room, with pool access, another pool further out and feet from that pool, a warm ocean beach.  We woke up in the morning to an amazing buffet (we had to sneak food to Tyler later since we only paid for 2 guests...)

Our next hotel purchase we decided to live large and spend $150 usd for a night.  This would be the price of a Holiday Inn in America, but here in Thailand we got an entire 2-story house overlooking the ocean with 3 showers, 2 decks and a private infinity pool on the lower level.  This was really an incredible experience.

On our last night at in Kho Tao we did the same thing and bought an awesome 2-story villa, overlooking a beautiful beach with a private pool and personal kitchen etc...

$150 divided by the three of us cost the same as an overpriced hostel in Paris.  To experience this grandeur for 50 bucks a person was really something special. 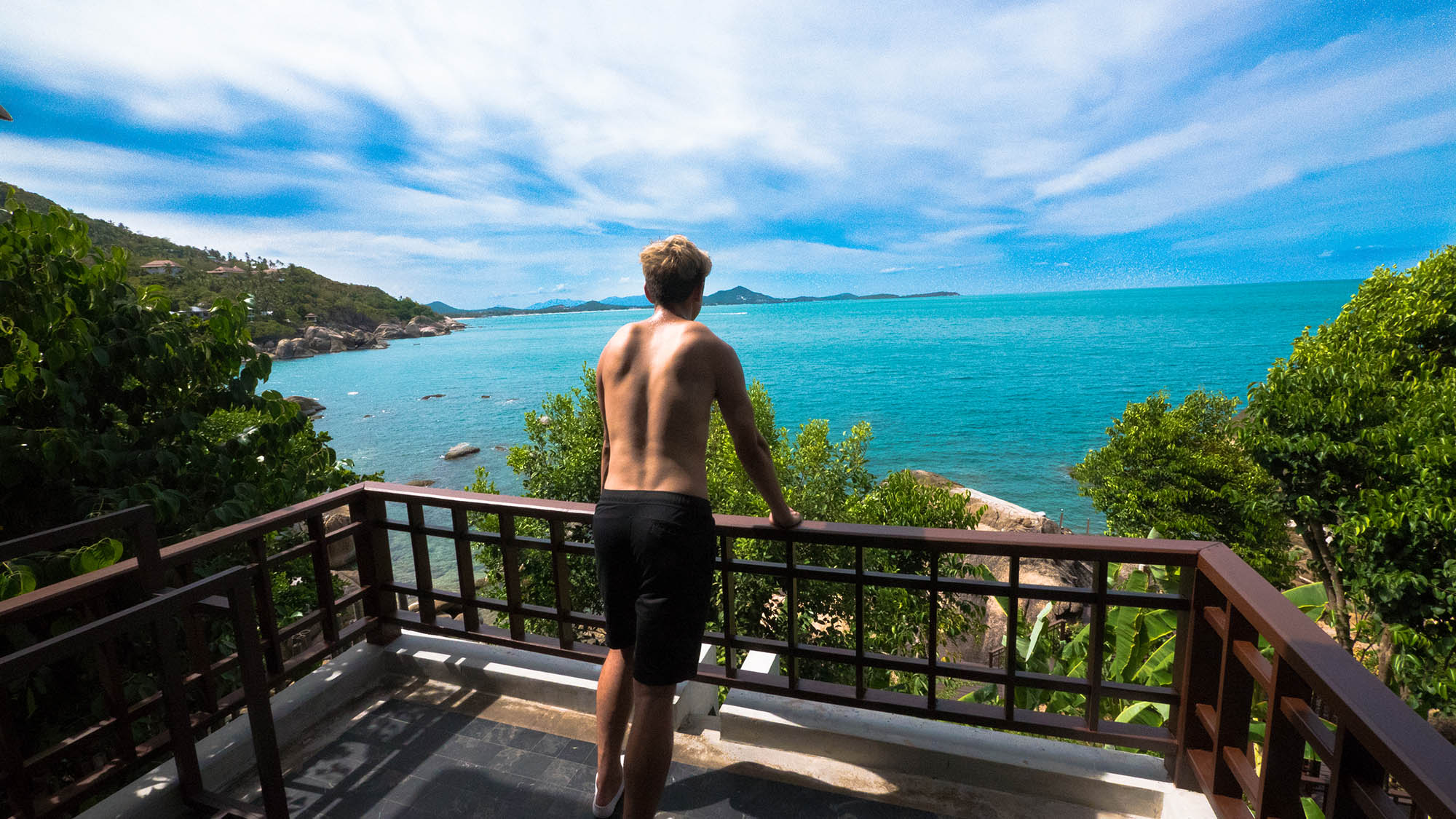 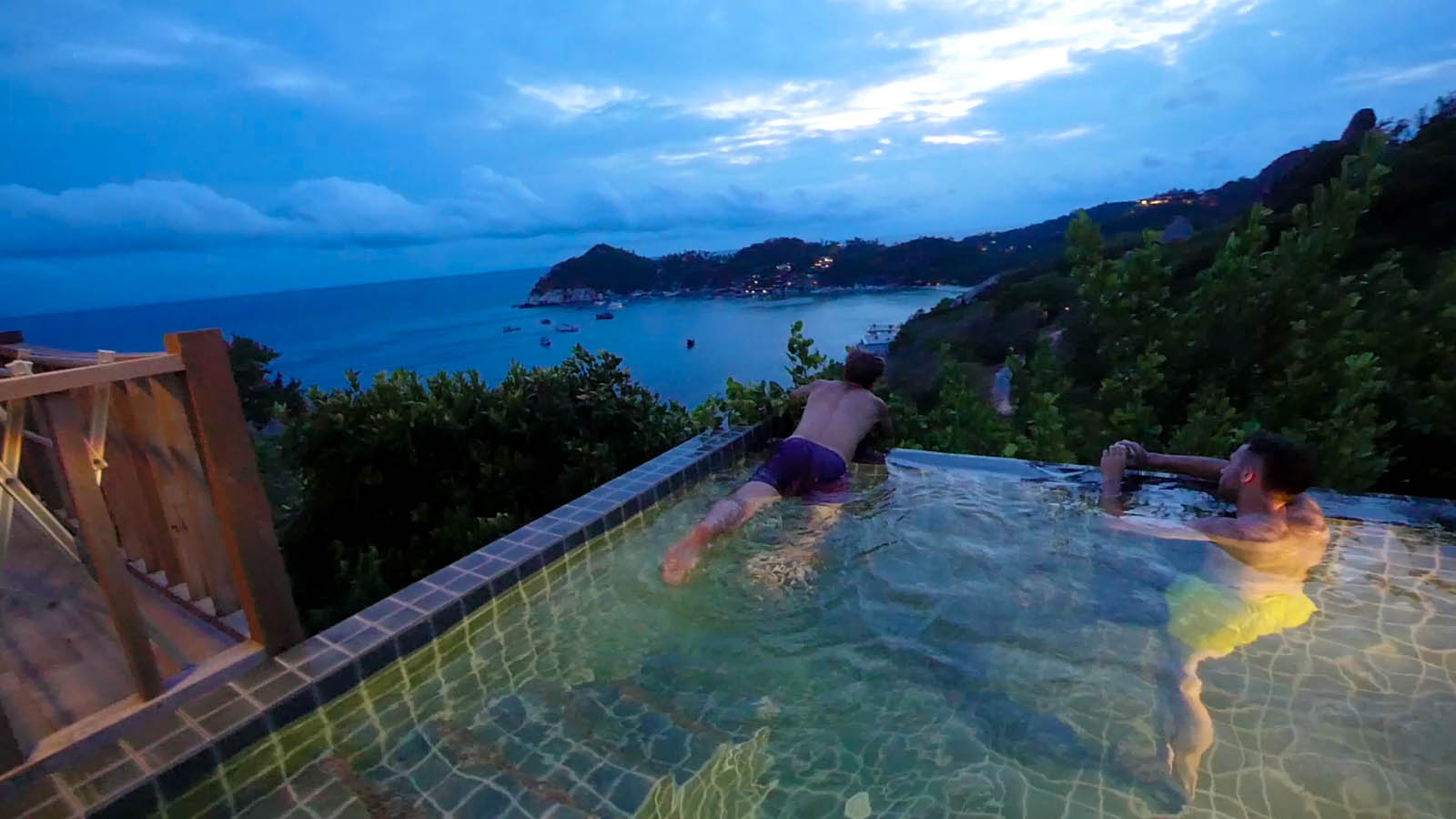 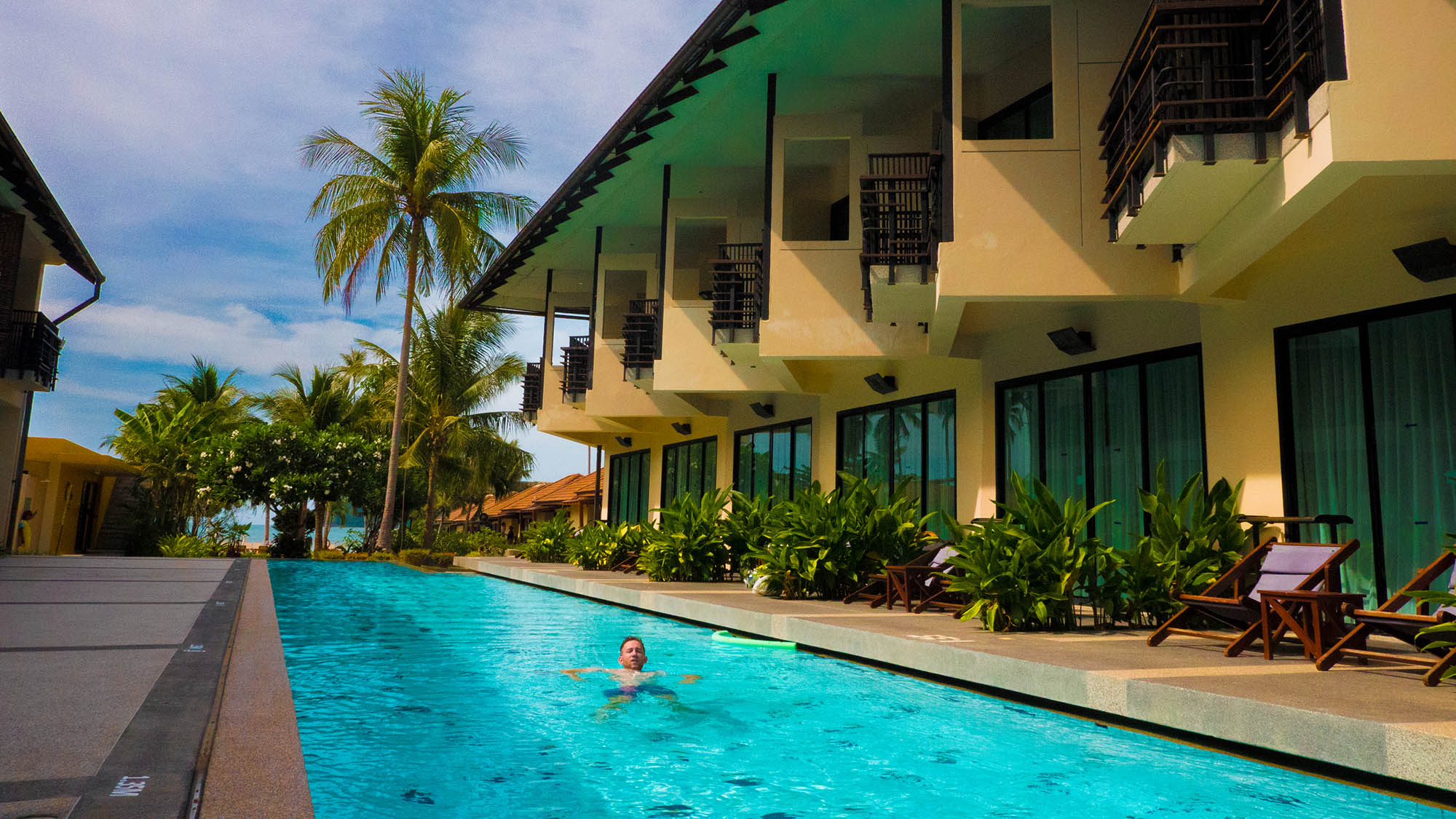 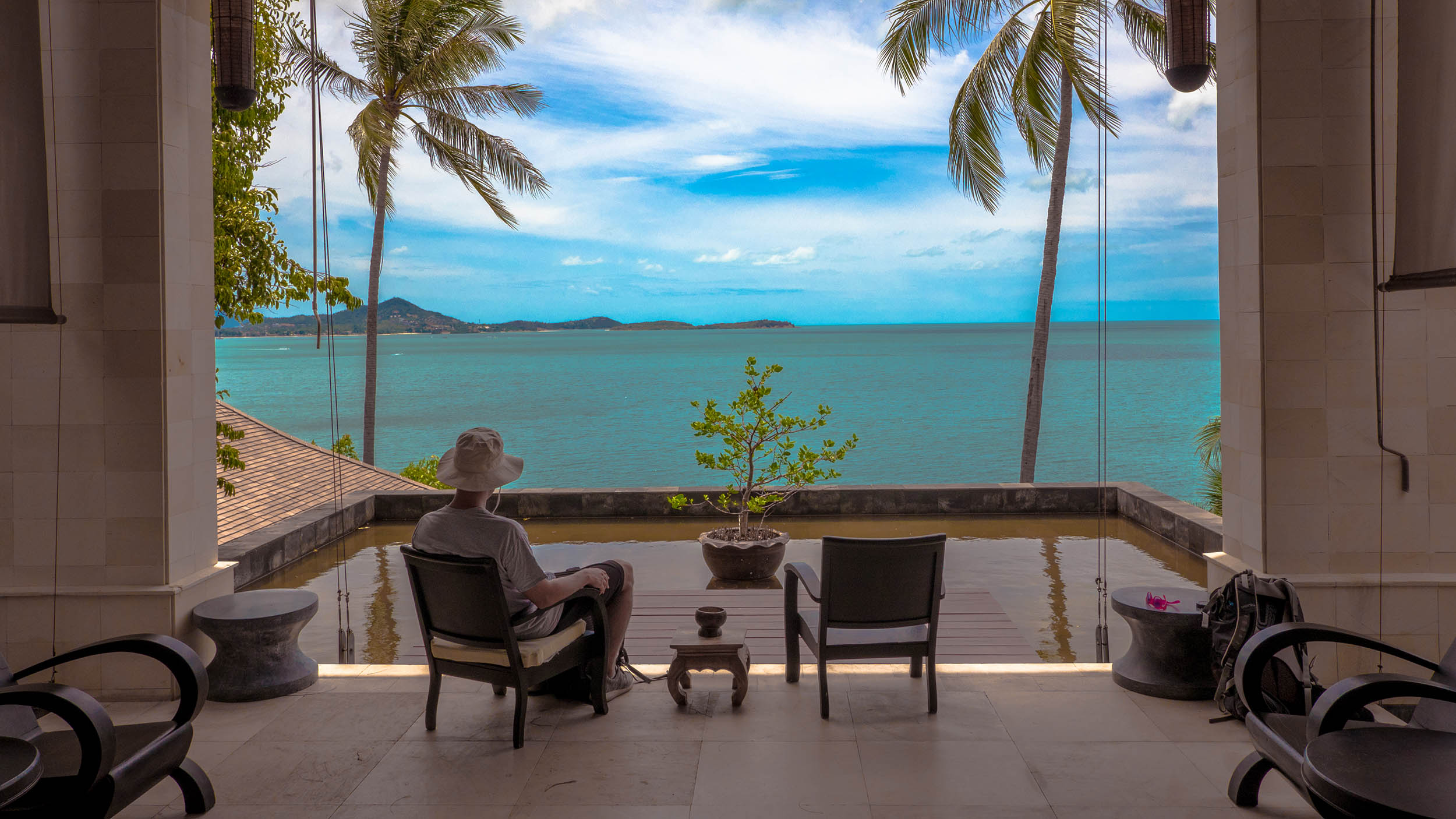 Tyler in his Gilligan Hat

Khao San Road is actually pretty cool... When I planned on going, I kinda thought it would be some kind of boring, over-hyped tourist trap.  I was in Bangkok alone for a day waiting for my friends to arrive and I had nothing to do anyway, so I figured I would head down to Khao San Road.  I was very pleasantly surprised when I arrived.  The atmosphere is great, there's tons of cheap food everywhere and bro-tanks are 2 for 5 bucks, what more could you ask for.  There are a bunch of inexpensive hostels to chose from and more than enough nightlife to satisfy the binge-drinking college student in you.

How to get to Khao San Road

First things first, there are two different pronunciations of Khao San Road … apparently… the first time our taxi man took us, we ended up somewhere halfway between the airport and the actual road on some street next to some high-rises and a super-mall.

I could tell from my barely functioning cell phone map that we were in the wrong place, ten kilometers from our desired destination.  I showed the taxi guy my paper again with the proper Thai translation, he had an epiphany, and then eventually got us to the right place.  If you don’t have some general understanding of what it's supposed to look like, or where it is on a map, you will probably have no idea where you are, and be at the mercy of the taxi driver.  So if at all possible, pull it up on a Google map so you know if you ended up in the right place. 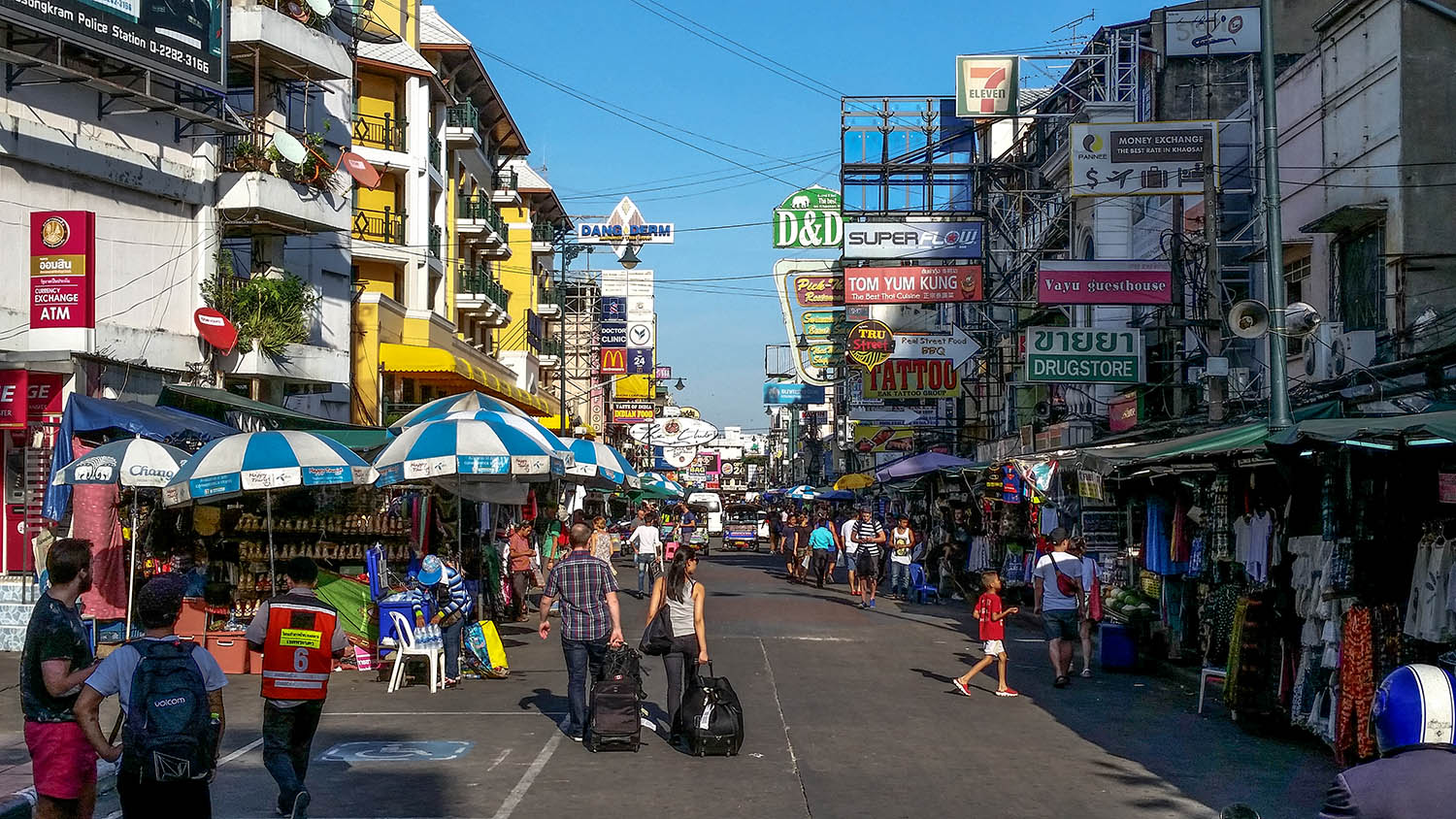 We kinda had our whole trip planned around being on the island of Kho Phan Ngan in time for the full moon party.  In all honesty, we had way more fun on the other islands.  At the end of the day, the full moon party is just another party.  It was crazy, cool and fun but not too terribly different from a Panama City Beach spring break.  I personally feel that when I'm flying 10,000 miles to a far-away land that it's kind of a waste to spend any of that time drunk or hungover.  Probably the highlight of the Full Moon Party is painting yourself up before the event, we had a good time with that.  Side note, if you get paint on the bed sheets, our hotel manager charged us $150 usd... another one of our hard lessons learned.  Other than the Full Moon party, the island of Kho Phan Ngan doesn't really offer much and I'd bail out the next day and head to a better island. 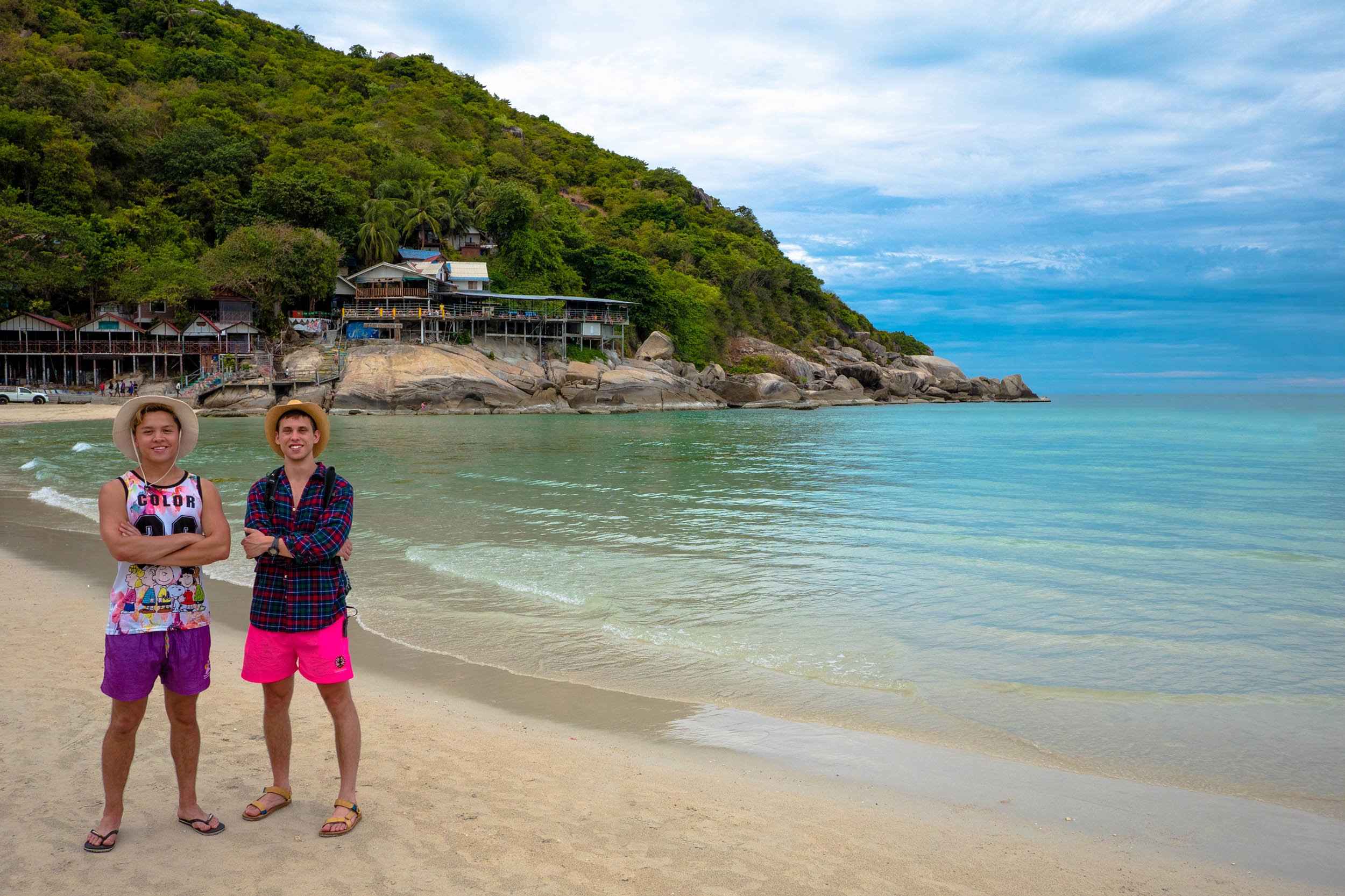 How to get from Bangkok to Koh Samui, Kho Phan Ngan, Kho Tao or Phuket

If you're in Bangkok, first things first you need to get to DMK airport if you're looking for a direct flight to Southern Thailand (where these islands are located).   A flight from DMK (Bangkok) to URT (Surat Thani airport in the south) only costs between $19 and $45 USD and is about an hour long.  Definitely worth buying a plane ticket over taking a 12 hour bus ride for around the same price.  Once you land at URT (Surat Thani airport) go to the front entrance and find a travel/bus company booth that works with the  "Lomprayah" ferry/catamaran boats.   At this booth, you can buy a complete package ticket that provides you with a 1 hour bus ride to the coast and a ferry ticket to the island of your choice.  (We bought our ticket to Kho Samiu and then later bought ferry rides from each island to the next)  You can buy ferry tickets on each island from several different vendors, even at some hotels. 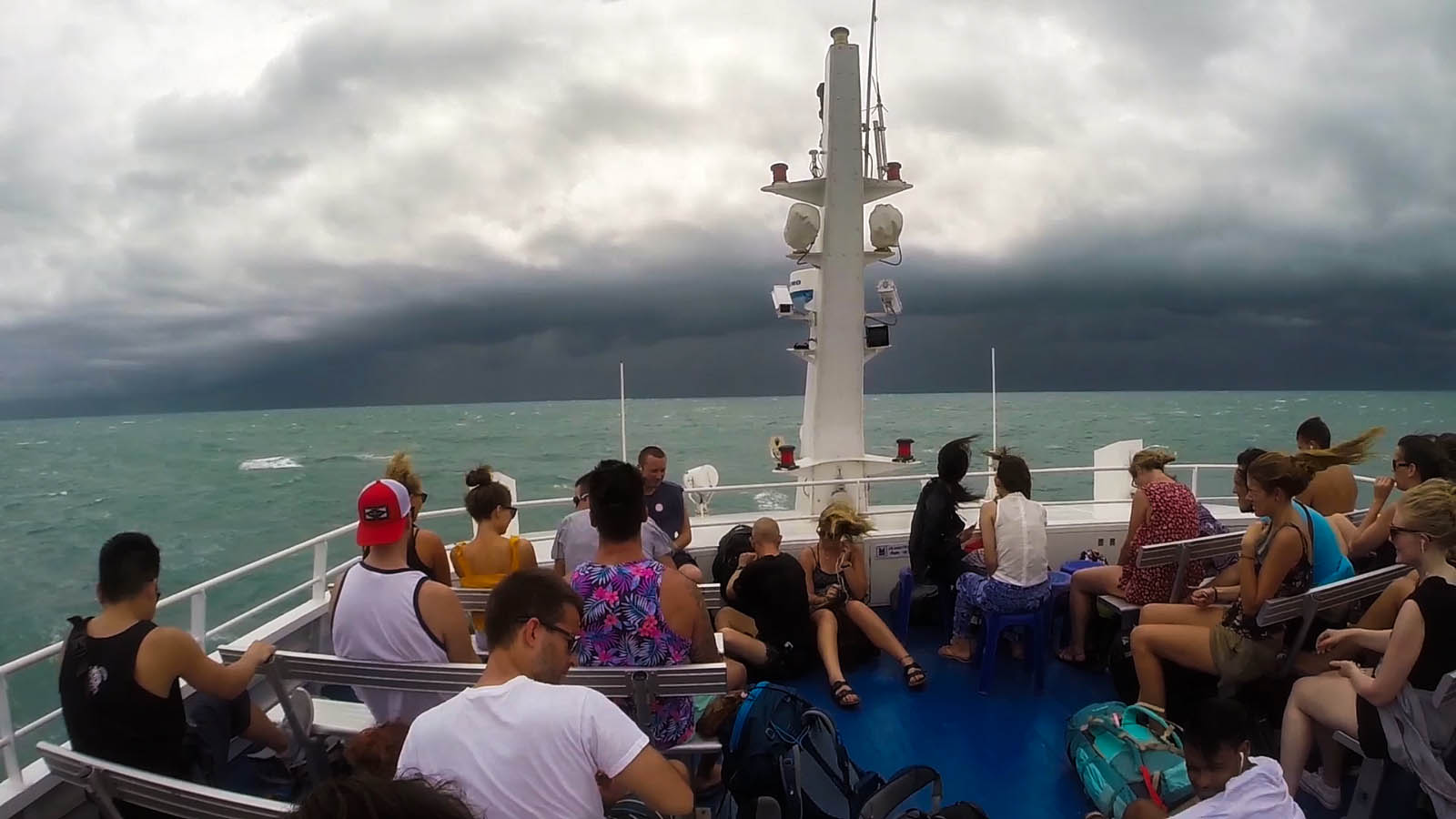 One of our ferries headed into the eye of a storm, I felt like Kate Winslet

Thailand uses 3 important airports which you may need for different reasons.

Coming from America, I landed at BKK airport.  BKK doesn't have direct flights to Surat Thani airport (URT), so I needed to take a taxi from BKK to DMK airport.  DMK is about 40 minutes from BKK via cab.  URT airport is the airport you're gonna wanna fly to if you're trying to get to the islands of Koh Samui, Kho Phan Ngan, Kho Tao or Phuket.

Khao San Road, BKK and DMK airport are basically a big triangle on the map, they are all about a 40 minute taxi ride away from one another.  30 Minutes if it's 3am, over an hour if traffic is bad.. so give yourself plenty of time if you're trying to catch a flight.   A taxi ride on any of these routes should cost between 350 and 500 Baht ~ $11 USD (definitely not more than 500 Baht).  I paid 400 without the meter running and like 380 with the meter running.  I almost like bartering for a 400 flat rate better, it keeps things simple.  Also, between DMK and BKK airport there are two tolls, one is 50 Baht and the other is 75 Baht.   There also might be a 50 Baht "airport fee."  I think this is standard practice for the taxi guys to ask for this fee when driving to or from an airport, or it could be a well engineered scam.. not sure.

It's also a good idea to print off a piece of paper with all your addresses written and translated in Thai because a lot of taxi guys don't really speak English, and may have no idea where you're trying to go.   I even had "Khao San Road" translated and printed in Thai and the guy took us to the wrong place.. so make sure you know exactly where you wanna go, and how to translate that to the driver, especially if it isn't an obvious place like one of the airports. 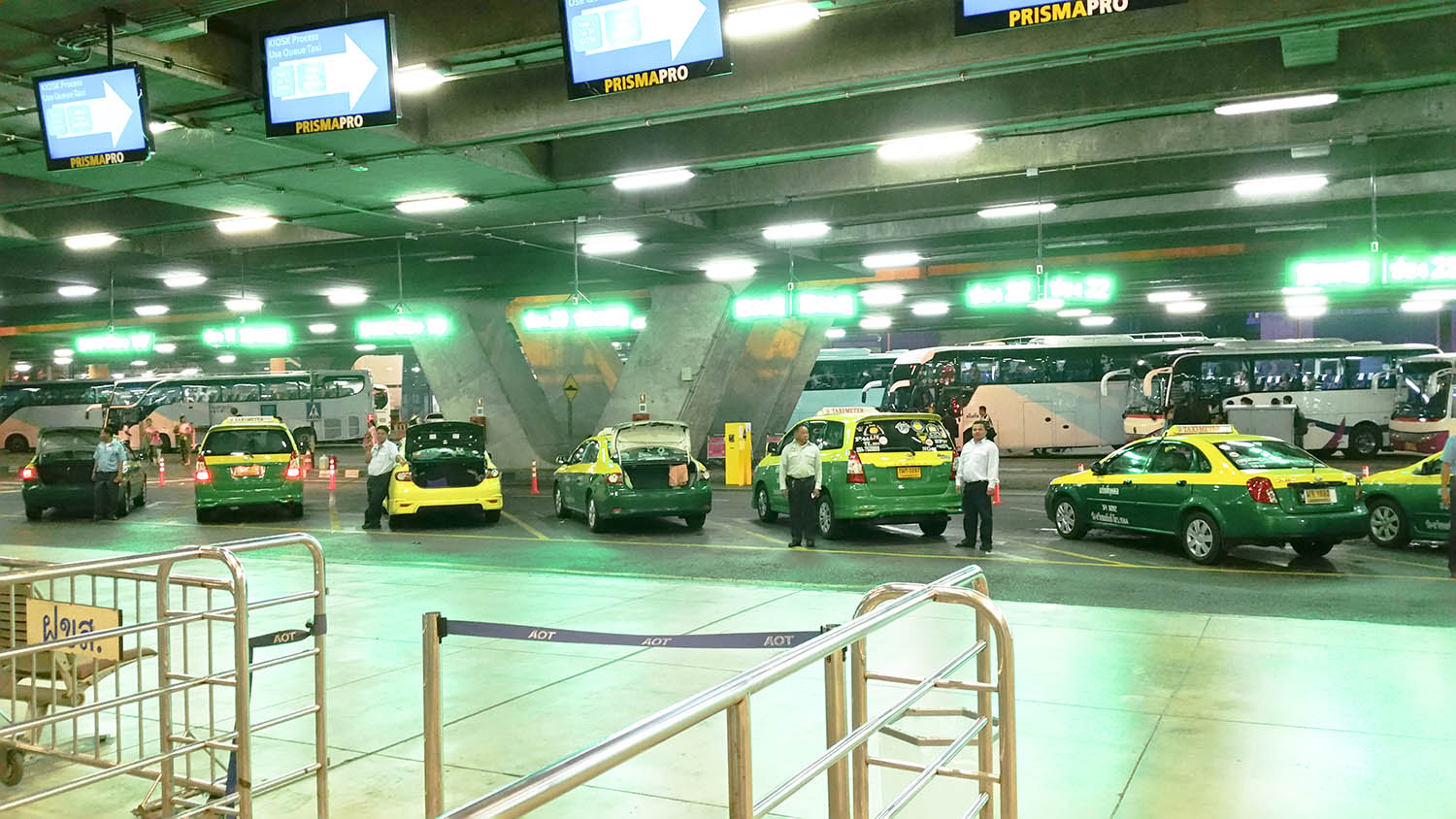 What airport is closest to the islands of Koh Samui, Kho Phan Ngan, Kho Tao or Phuket?

Which islands are the best to get sweet hotel rooms in Thailand?

Is the full moon party in Thailand fun?

How much is Pad Thai in Thailand?

How can I get a good feel for what a trip to Thailand is gonna be like?

There's tons of stuff you may want to pack so here are some things you can't live without in Thailand: 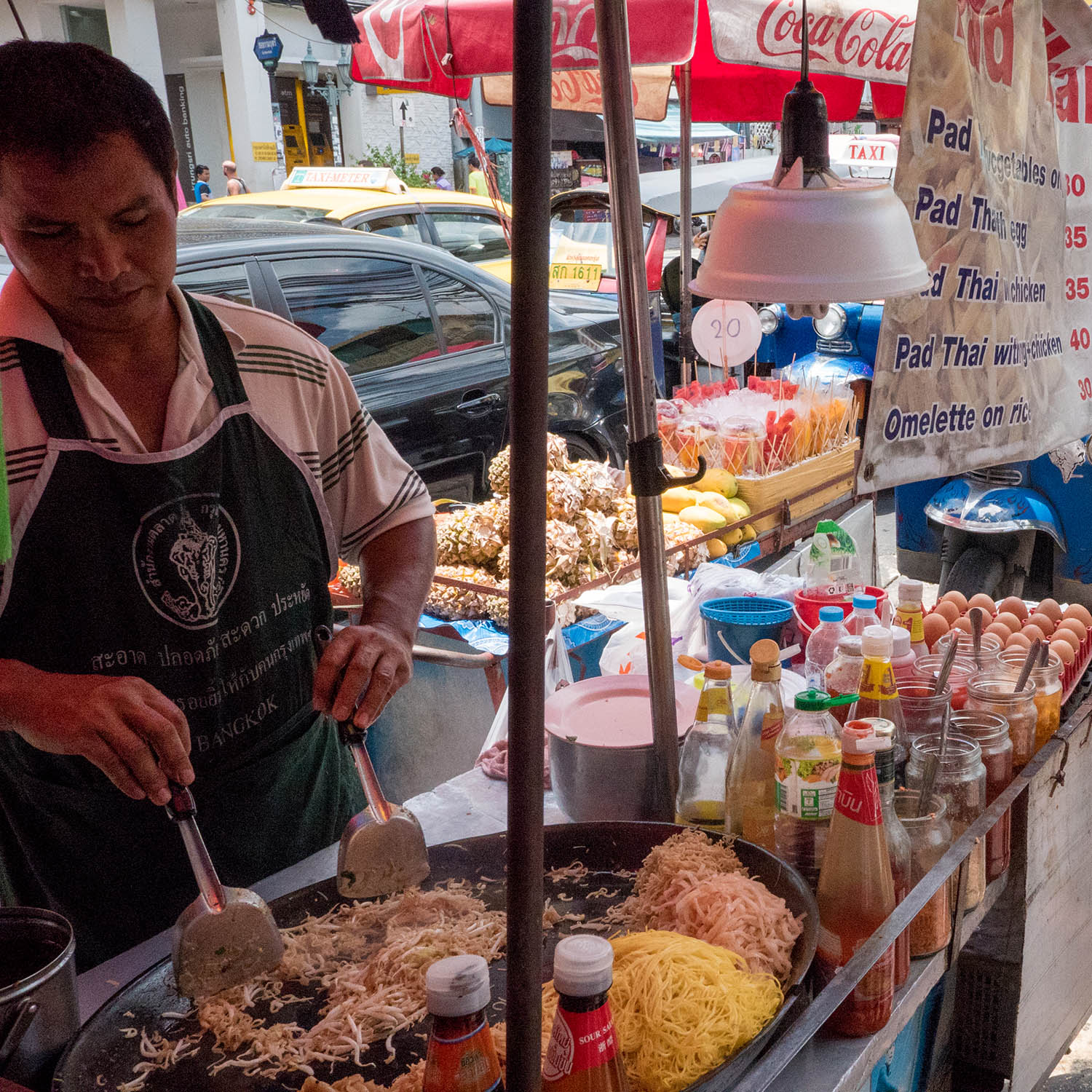 One day I had Pad Thai 5 different times 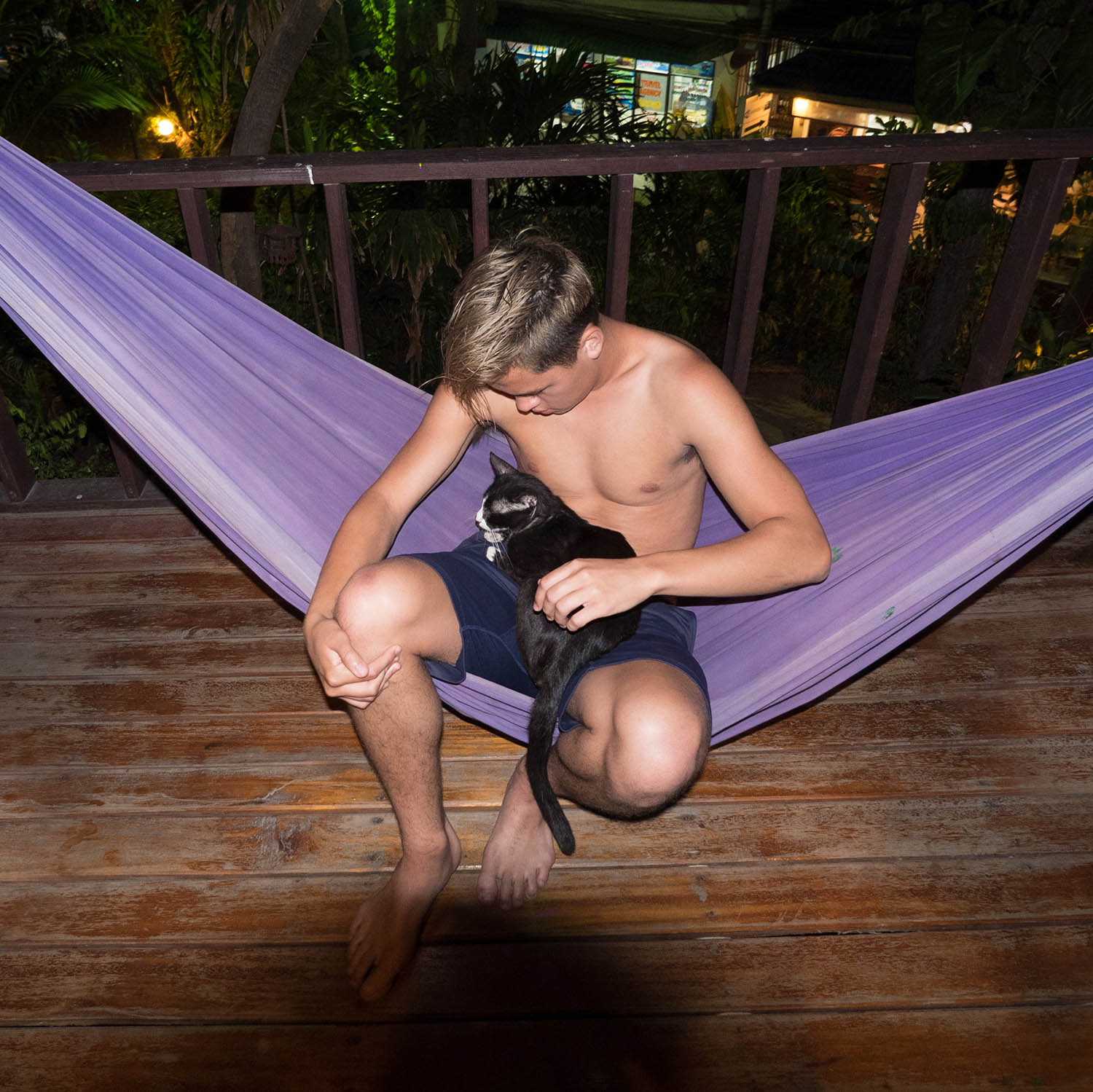 Tyler with our new friend, Gonzo the cat.

I have a separate blog-post about renting mopeds in Thailand, click here...

to Everest Base Camp