Home / / Uncategorized / Things to do in Alaska in the Winter

Alaska in the Winter | Best Hikes 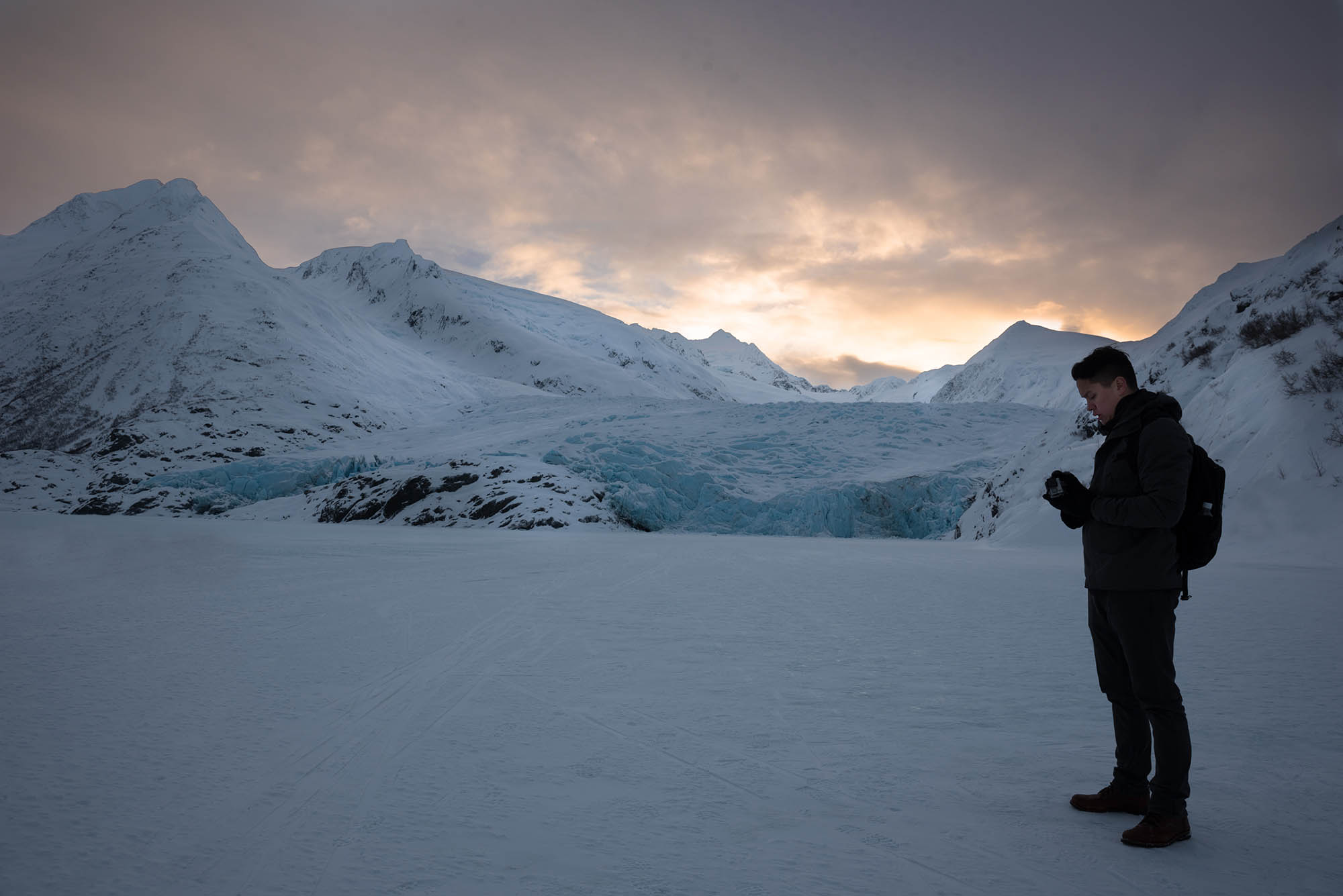 We filmed three episodes of the adventure

How to get to 'Exit Glacier'

Terms... Let me describe what each of these things actually is...

Exit Glacier Road:  Exit Glacier Road is closed during the winters.  We knew this, and were prepared to hike the whole thing.  Exit Glacier road/path is covered in snow and is a pretty strenuous hike at 7.3 miles one way (to Exit Glacier).  This trail is also probably pretty dangerous because of the surplus of moose that also use it.  At any point in the trail, we could see about 4 pairs of fresh moose tracks in the snow.  Some tracks looked minutes or hours old.. (it had just snowed a bunch the night before which had covered up any old tracks...)   In the summer you can drive this road/trail and get to Exit Glacier much easier and faster.  In the winter your only option is to walk, or if you're lucky enough to own a snowmobile, you can do that too..

We started our hike very late!  Around 2:30 in the afternoon we began our hike.  By the time we arrived at Exit Glacier, the sun had gone completely down and we were sentenced to walk the entire 7.3 miles back in darkness.  Normally this would be fine, but there were seemingly moose everywhere surrounding us so it was a little nerve-wracking and potentially rather dangerous.

Harding Icefield:  We started the day with intentions of reaching Harding Icefield.  We thought at the end of our hike (the end of Exit Glacier Road) we would arrive at the Harding Icefield viewpoint and see the beautiful, snow-covered expanse that goes as far as the eye can see.  Once we arrived at Exit Glacier and couldn't see the Icefield, we knew we were mistaken..  To get to the viewpoint to see the icefield, you must continue your hike, and start climbing up the mountain beside the Exit Glacier itself.  This trail up the side of the glacier is what I'm going to refer to as Exit Glacier Trail/Hike.  Not sure if there is a technical name for it.. But I've heard it's pretty hard, and about 8 or 9 miles round trip.  We were kinda bummed that we couldn't continue on.  It was now dark and we were starving and cold and decided to start heading the 7.3 miles back to our car.  Next time I'm in Alaska during the summer I'll go to the Harding Icefield... 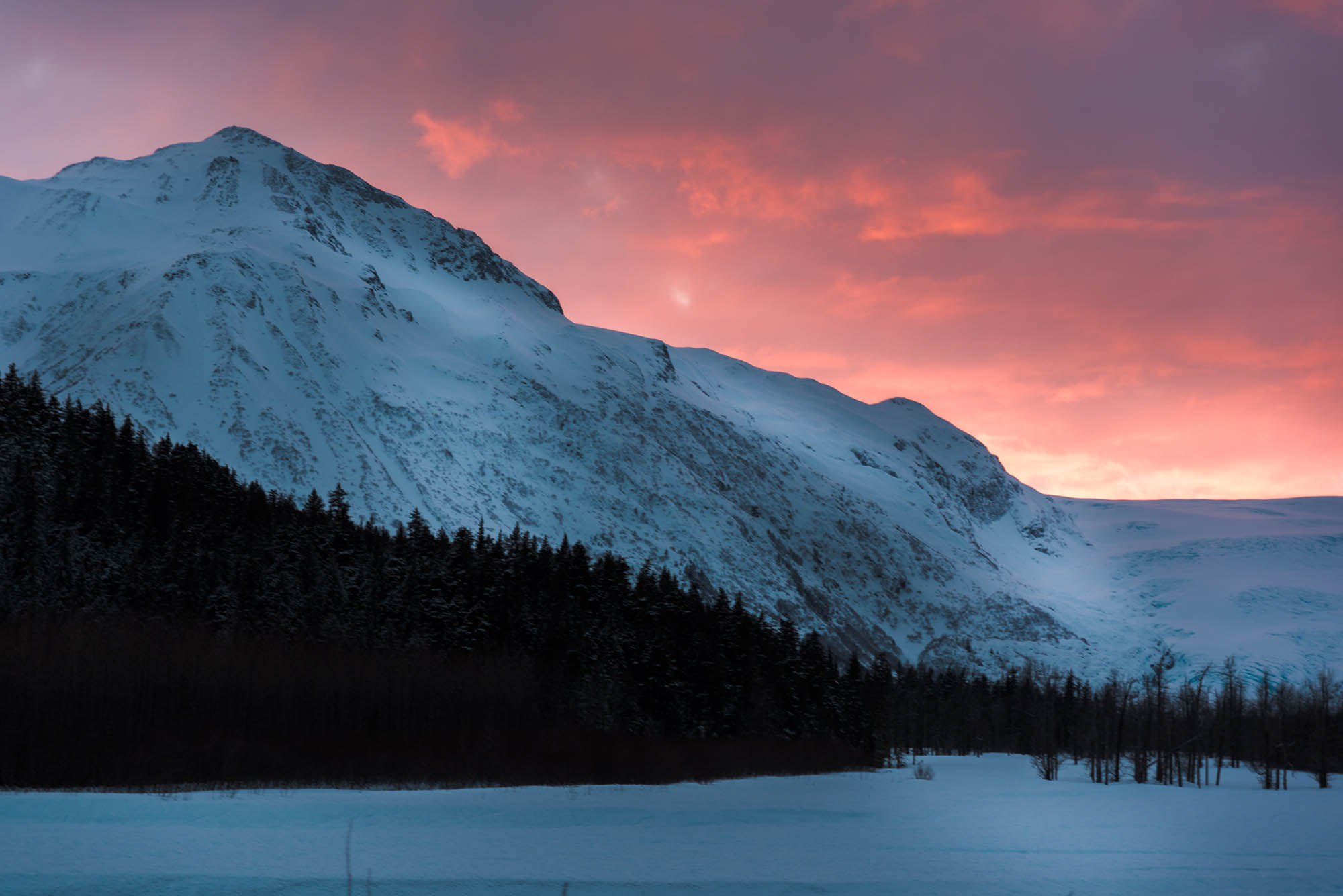 We're getting close to our destination at sunset... You can see Exit Glacier in the bottom right. 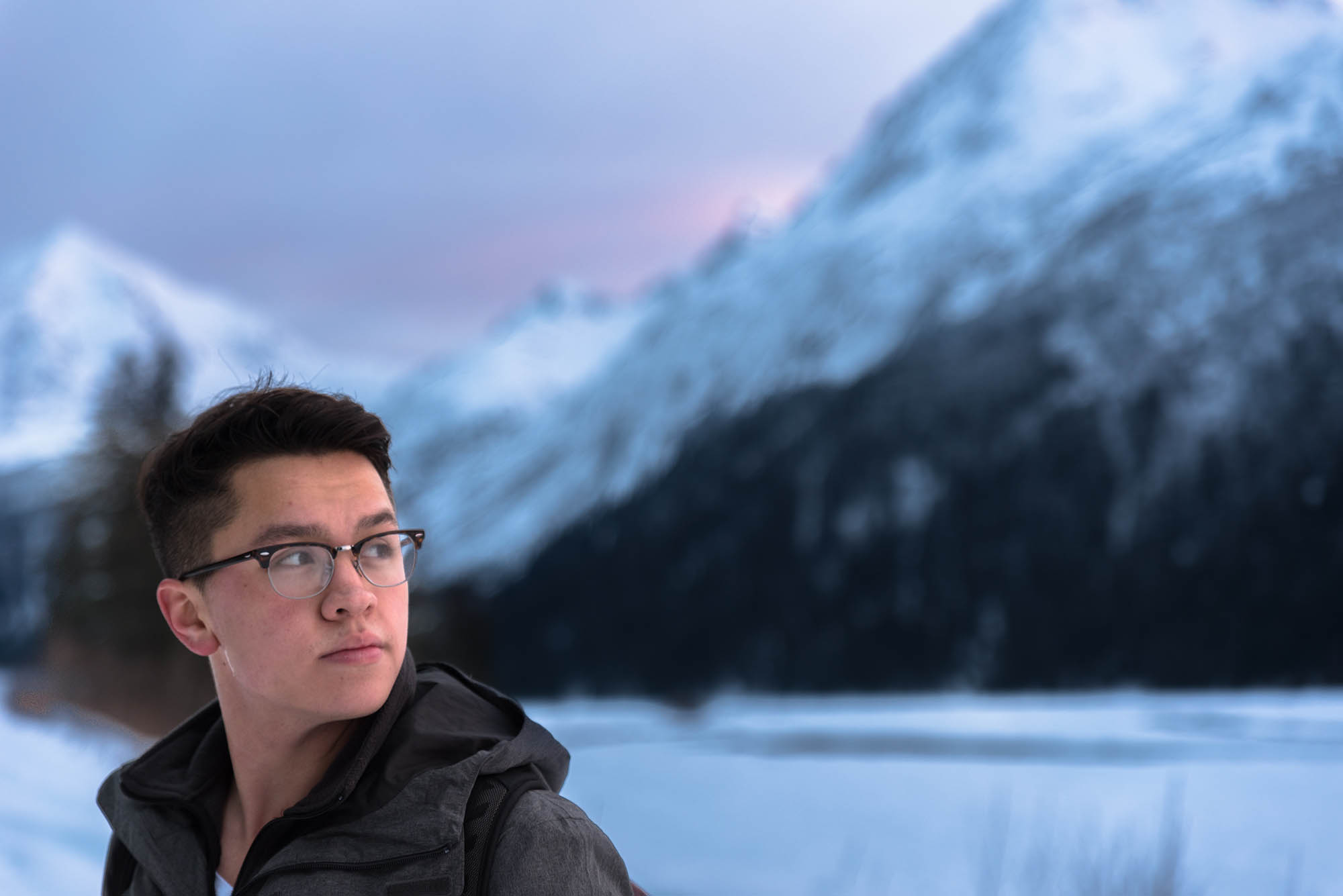 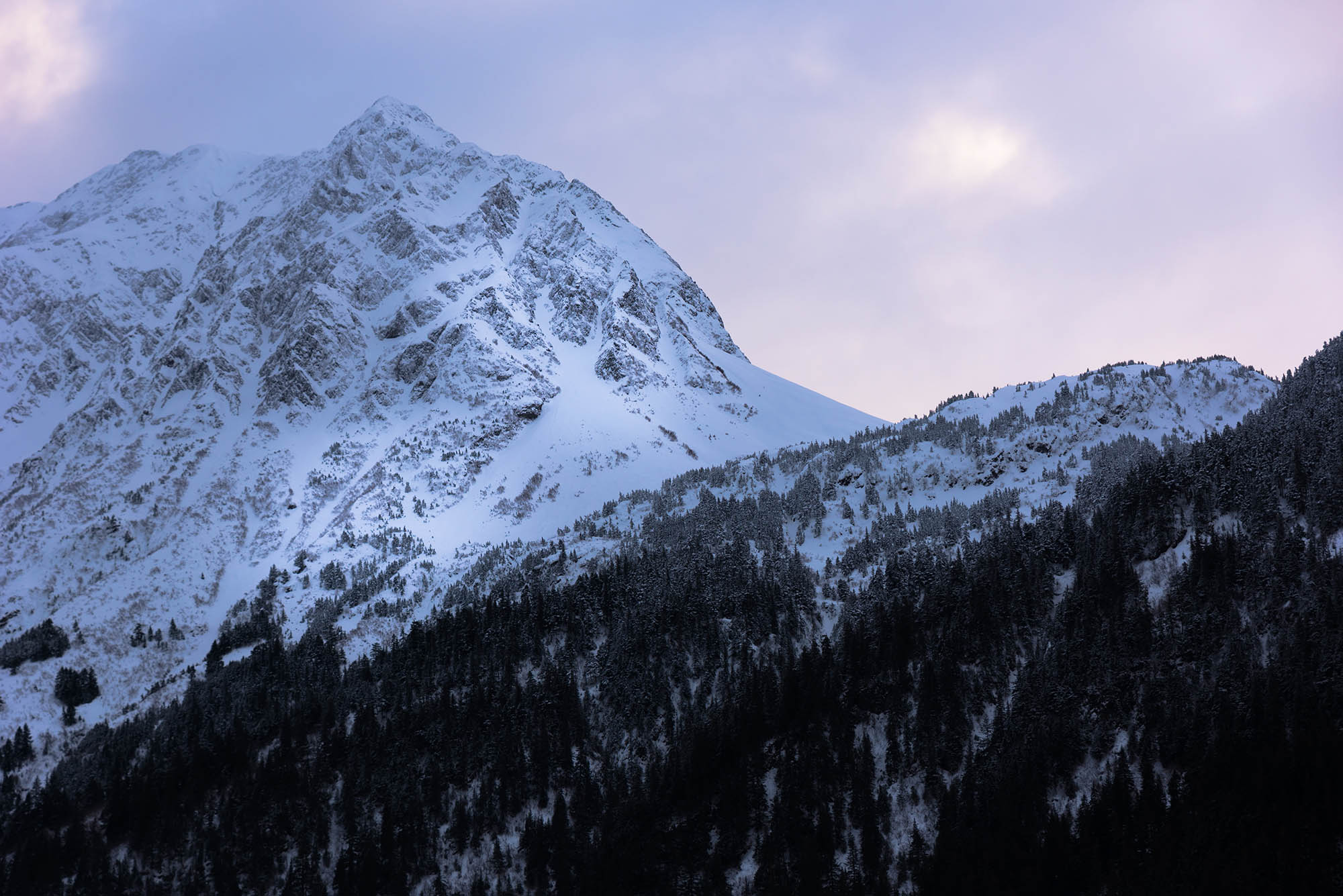 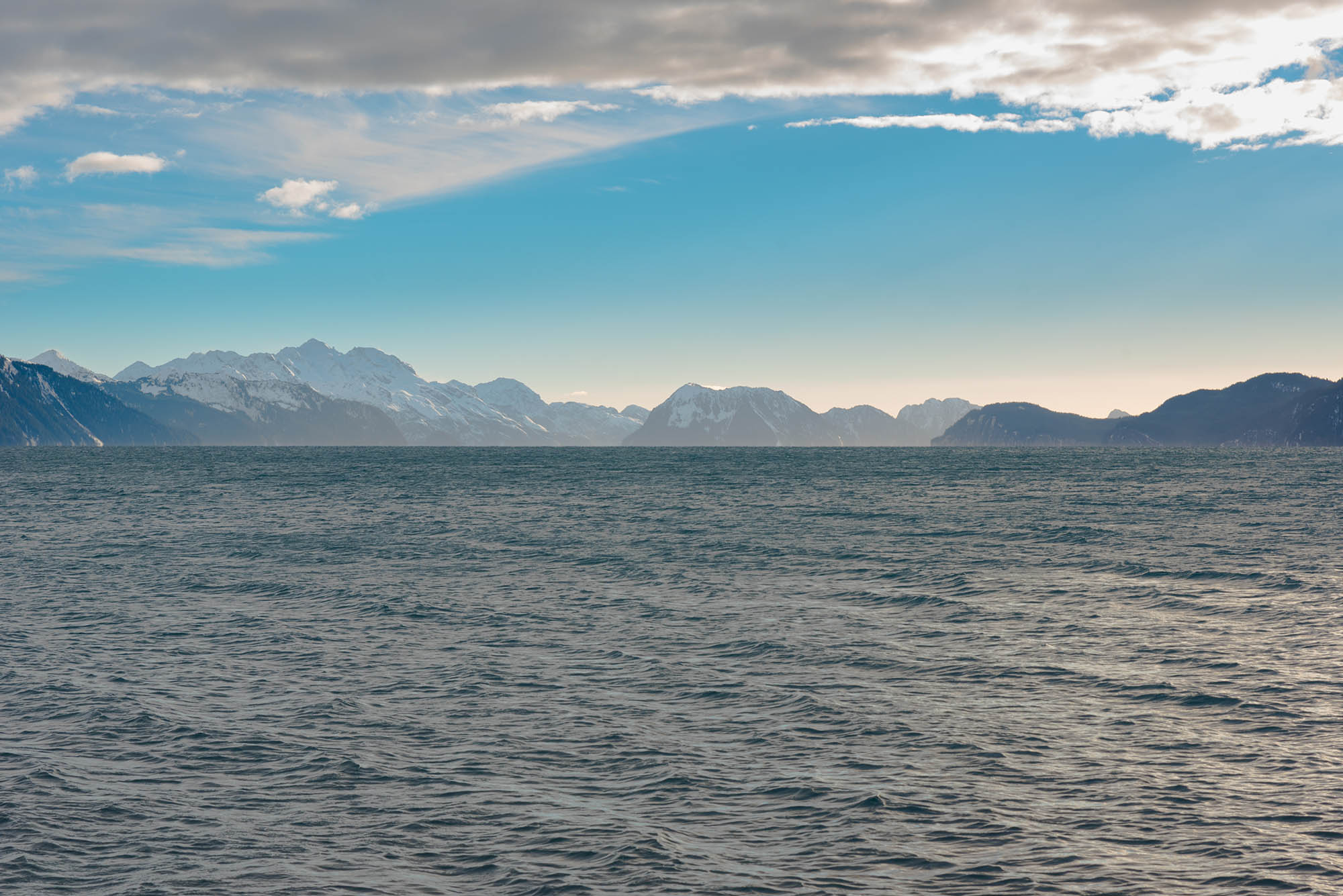 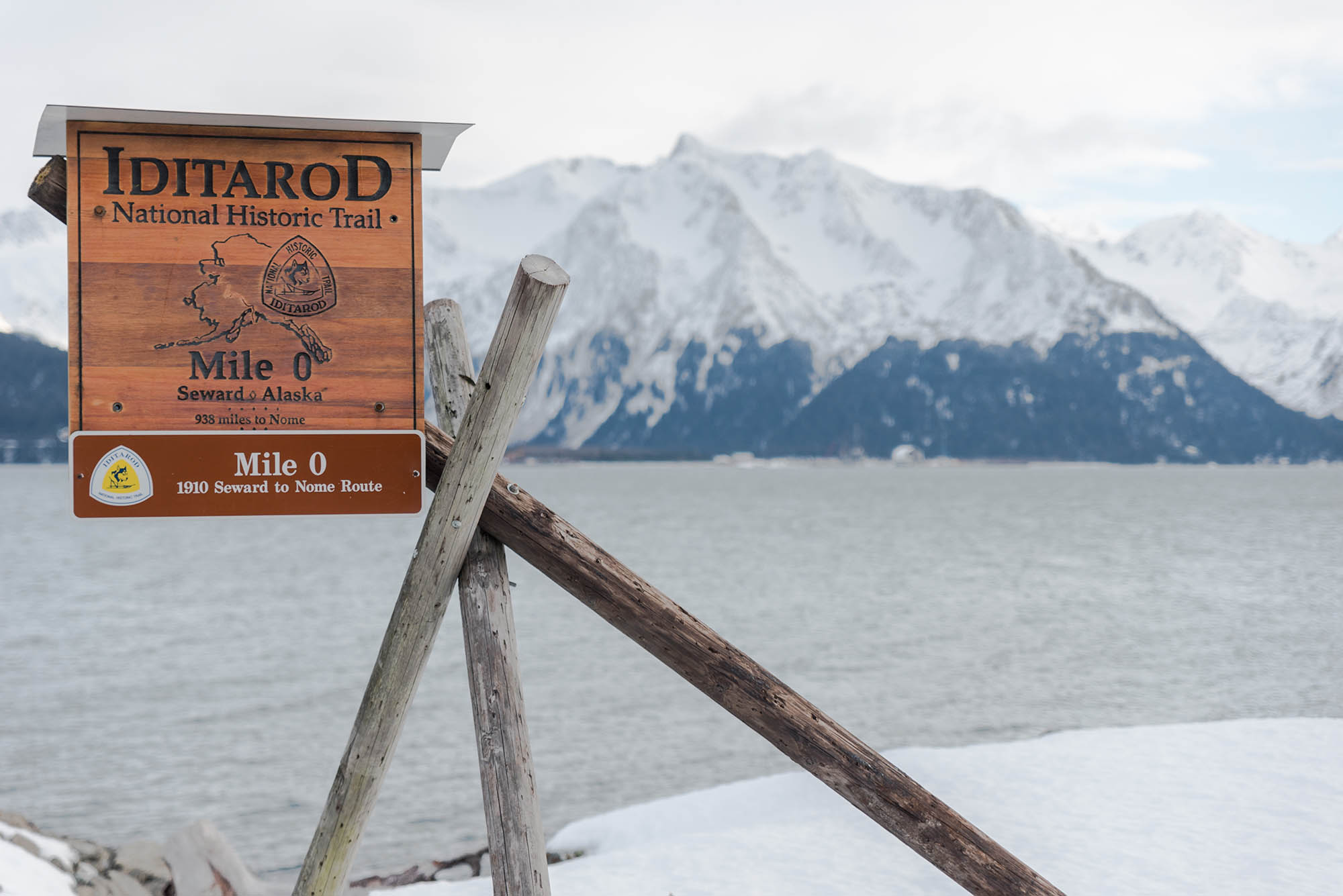 Tyler looking hopeful on our hike to Exit Glacier.  Bottom two images are of Seward Alaska, the beginning of the historic Iditarod Trail (in modern times the Iditarod race starts in Anchorage). 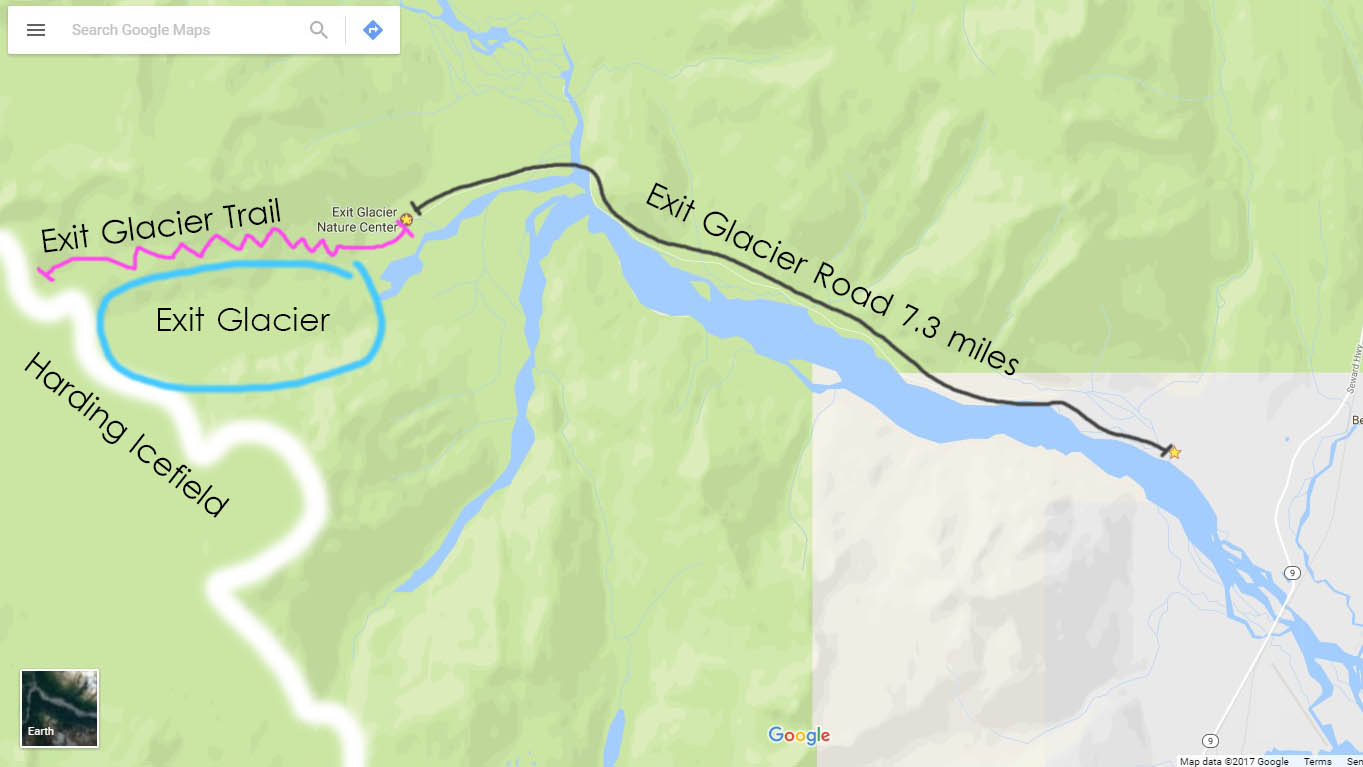 We hiked the road covered in snow. To see the Harding Icefield, you must also hike up the side of Exit Glacier.

The Portage Glacier Lake Hike is cool because you can only do it in the winter.  The mountains surrounding this lake are so steep and impassable that you can only see Portage Glacier via a ferry/boat if the lake isn't frozen over.  Once winter hits, the lake freezes and allows visitors to make the trek across and around a bend to reach the glacier.  Walking across the lake is 4ish miles one way and takes longer than we anticipated, so give yourself several hours...  We were at the finish line (Portage Glacier) for sunset, .. it was beautiful.  We were the only people on the entire lake, and we got some pretty epic drone shots... The cool thing about going to Alaska in the winter is that you're pretty much alone on any trail/hike you embark on.  Makes for some cool pictures and some cool feelings.  A few times during this hike Tyler and I would walk near each other and feel the ice crack beneath our feet, a little spooky.. But we had a plan ready if one of us fell into the water:  "Throw the camera out..Save the camera.."  That was step 1 of the plan.  There wasn't really a step 2. 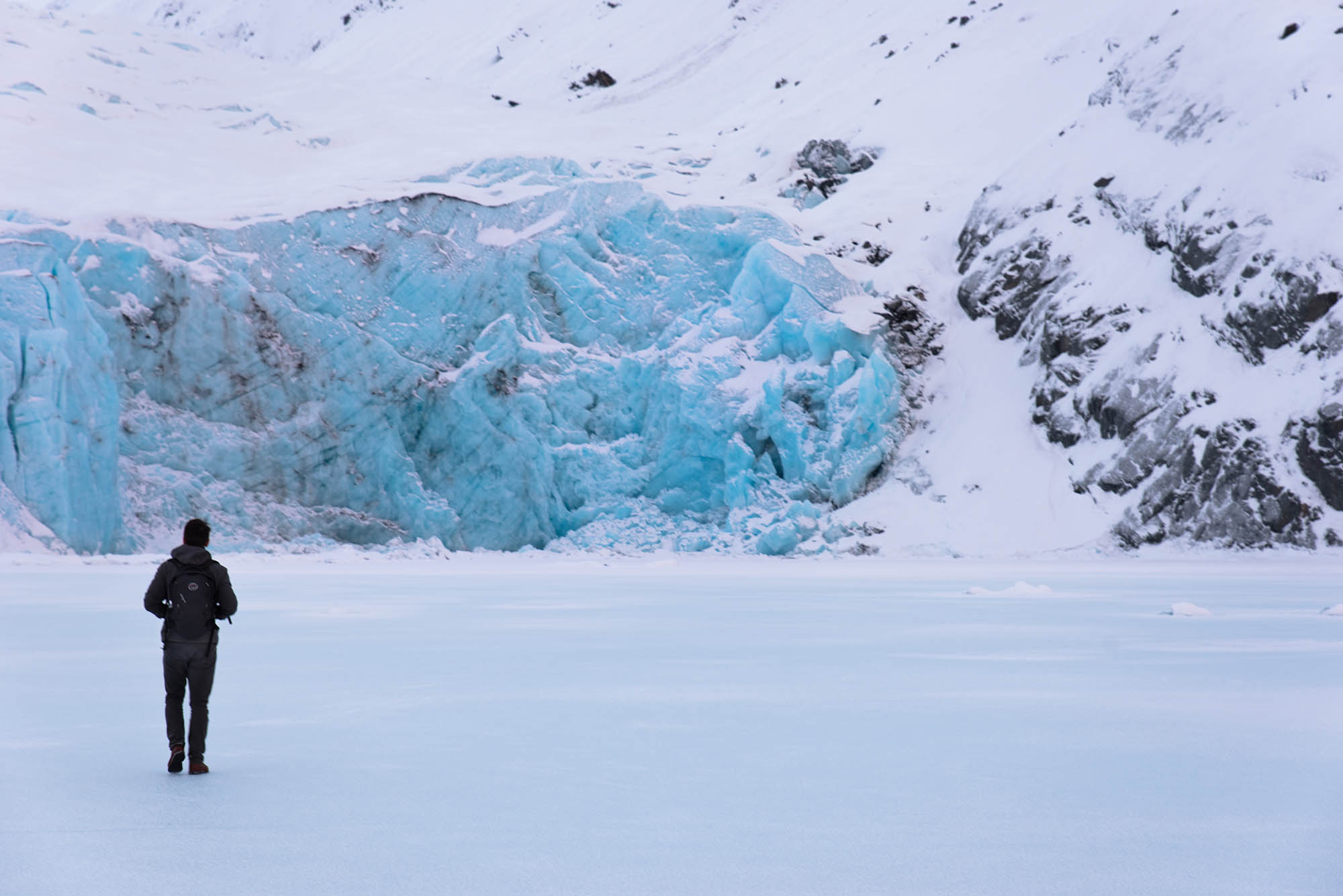 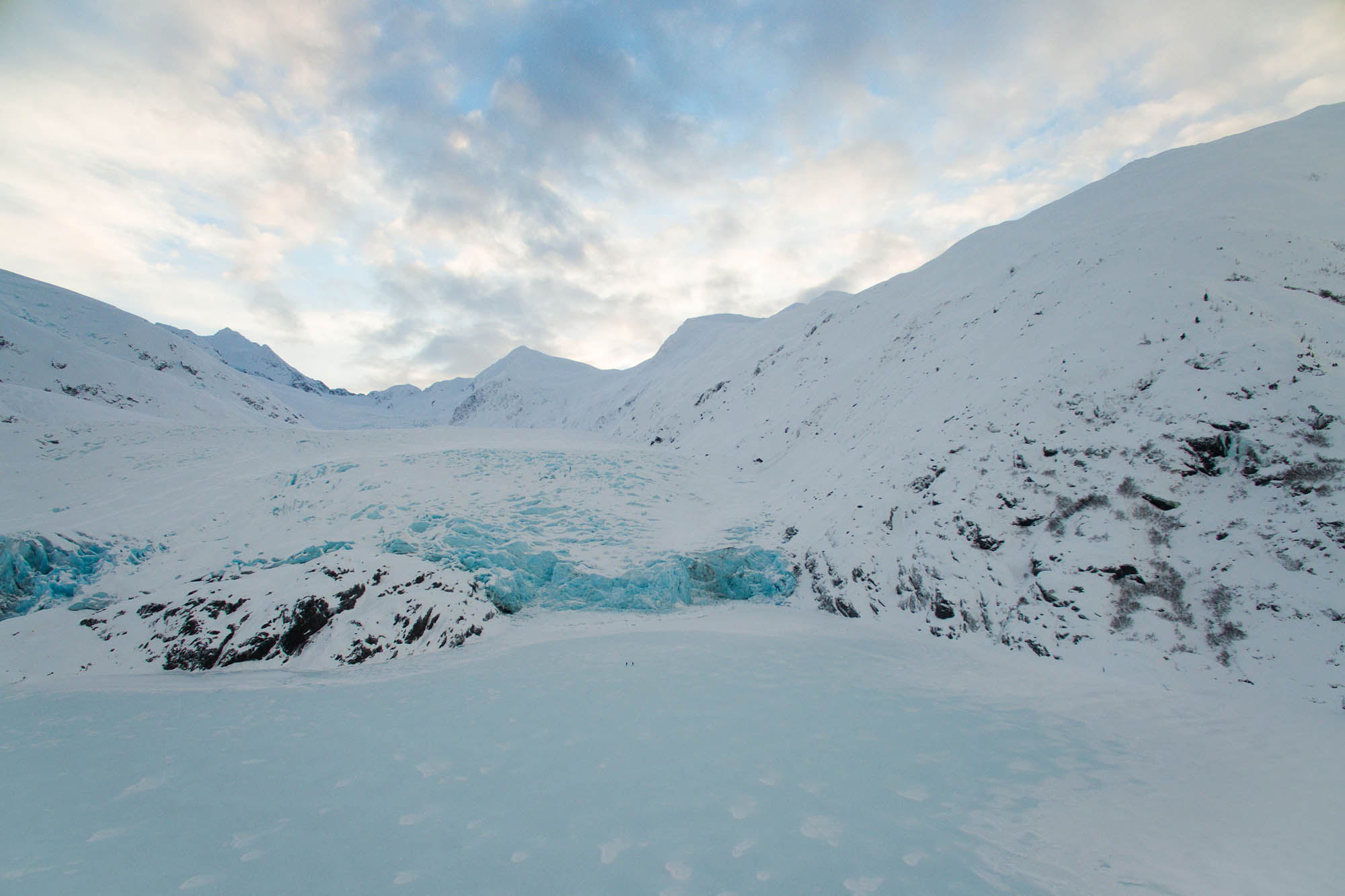 Bottom left is a drone shot.  See if you can spot the two black dots in the middle of the lake...  That's me and Tyler.  The only ones on the lake. 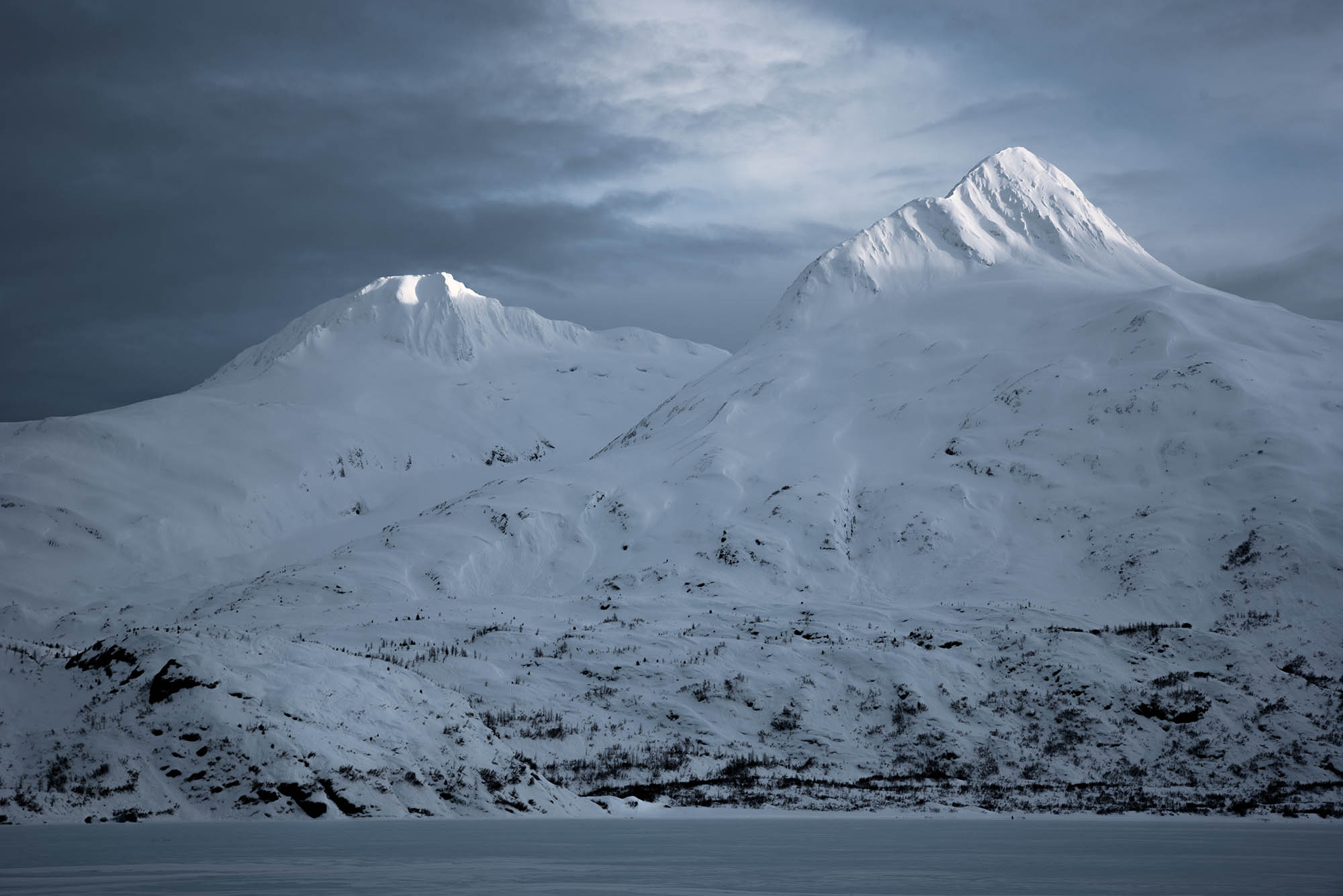 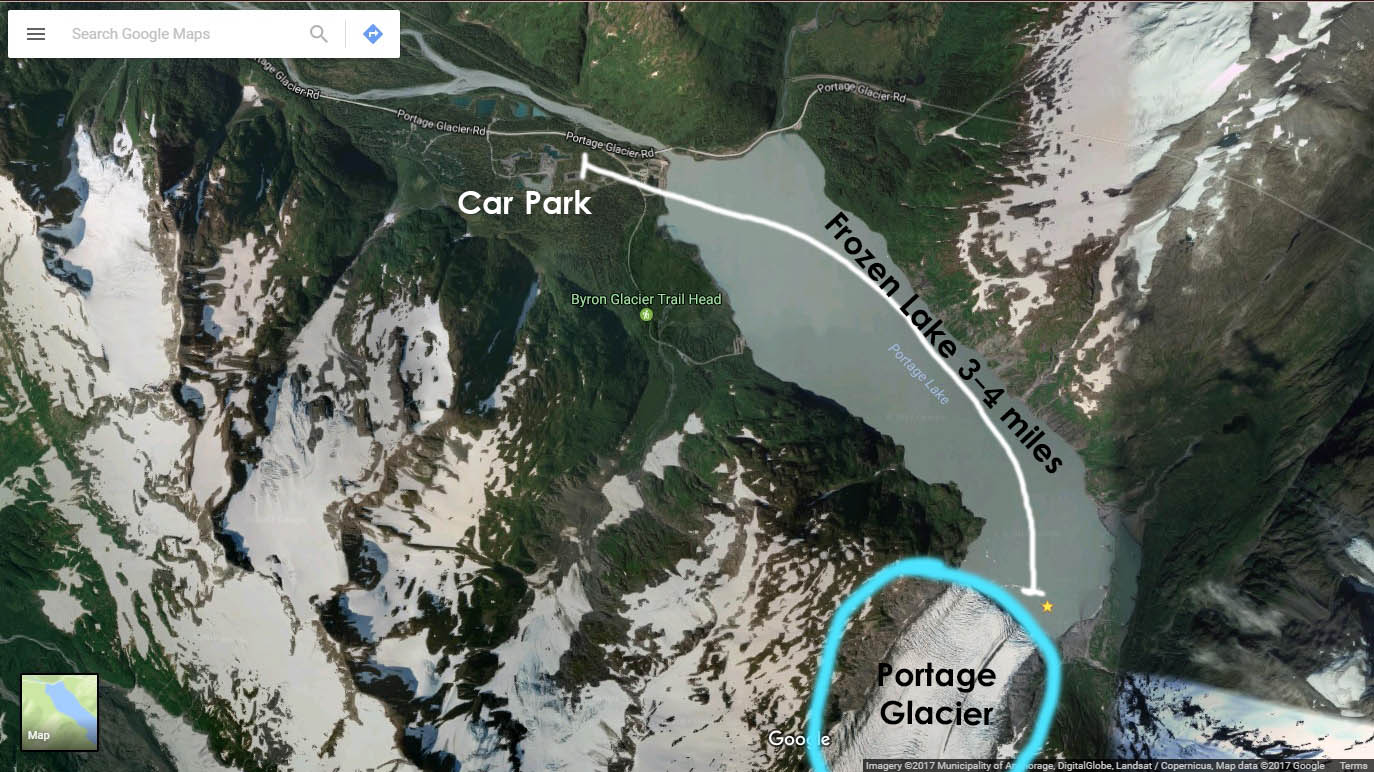 How to get to Portage Glacier. You cant see it until you pass the final bend in the lake.

What are the best hikes near Anchorage?

The Portage Glacier Lake hike is only an hour and a half from Anchorage.  Definitely worth the short drive.  Totally free too...

Things to do in Alaska in the winter?

There's actually a ton of stuff to do in Alaska during the winter.  There's a ski resort only 58 minutes East of Anchorage airport where you can shred the slopes all day, or rent cross country skis, snowshoes, or whatever.  Then hit up Portage Glacier which can only be done in the winter.

Are moose or bear dangerous in Alaska?

We talked with a few friendly locals about this.  They said there are tons of bears but they are usually hibernating and not really a problem during the winters.  But moose on the other hand are extremely prevalent and possibly dangerous if found in the wrong circumstance.  If you're hiking in Alaska during the summer, maybe invest in some bear spray.

Is it hard to drive in Alaska in the winter?

Being from Wisconsin, I am very used to cold, snow-covered and icy roads.  In Alaska it's a little different though... There is always tons of snow, which is to be expected, but the difference between here and Wisconsin is that in Alaska, they don't use salt on the roads.  At least not that we could see.  This becomes a major problem when the snow gets packed down.. The roads get super slippery, and become blanketed in pure ice.  The road along the coast (Alaska Highway 1) looked normal in the dark as we were driving.  We were driving really slow and our car was sliding sideways when we tried to stop.  We stopped the car and felt the road with our hands, it was pure ice.  Very invisible, frozen ice.  Not melted slop like in the lower 48 states.  So be really careful if the temperature is around 32 degrees.  Rain freezes and snow turns to ice.  Most Alaskan people we saw had really nice snow tires with metal studs like golf shoes...

Is it cold in Alaska (Anchorage) during winter?

In the Anchorage area of Alaska it wasn't that cold.  Very similar weather to Wisconsin/Minnesota.  We were there at the end of January, it was about 32 degrees or two days and around 6 degrees for two days.  (Fahrenheit)

How expensive is food in Alaska?

It's pretty expensive, similar to Hawaii or some expensive city.  We saved money by buying almost all of our food at gas stations which had pretty reasonable prices.

Is gas expensive in Alaska?

No, not really.  It's about the same as the lower 48 states.  At least in the Anchorage area.

Best place to ski or snowboard in Alaska?

There's a place conveniently near Anchorage with cool views of the ocean.  Ask me on Facebook

or check out airbnb to stay cheaper than hotels.  Use my code to get $35 off your next stay if you want:  www.airbnb.com/c/kevink151

Side note - Alaskan people are the nicest people in all of America, and possibly the world.

How to get to