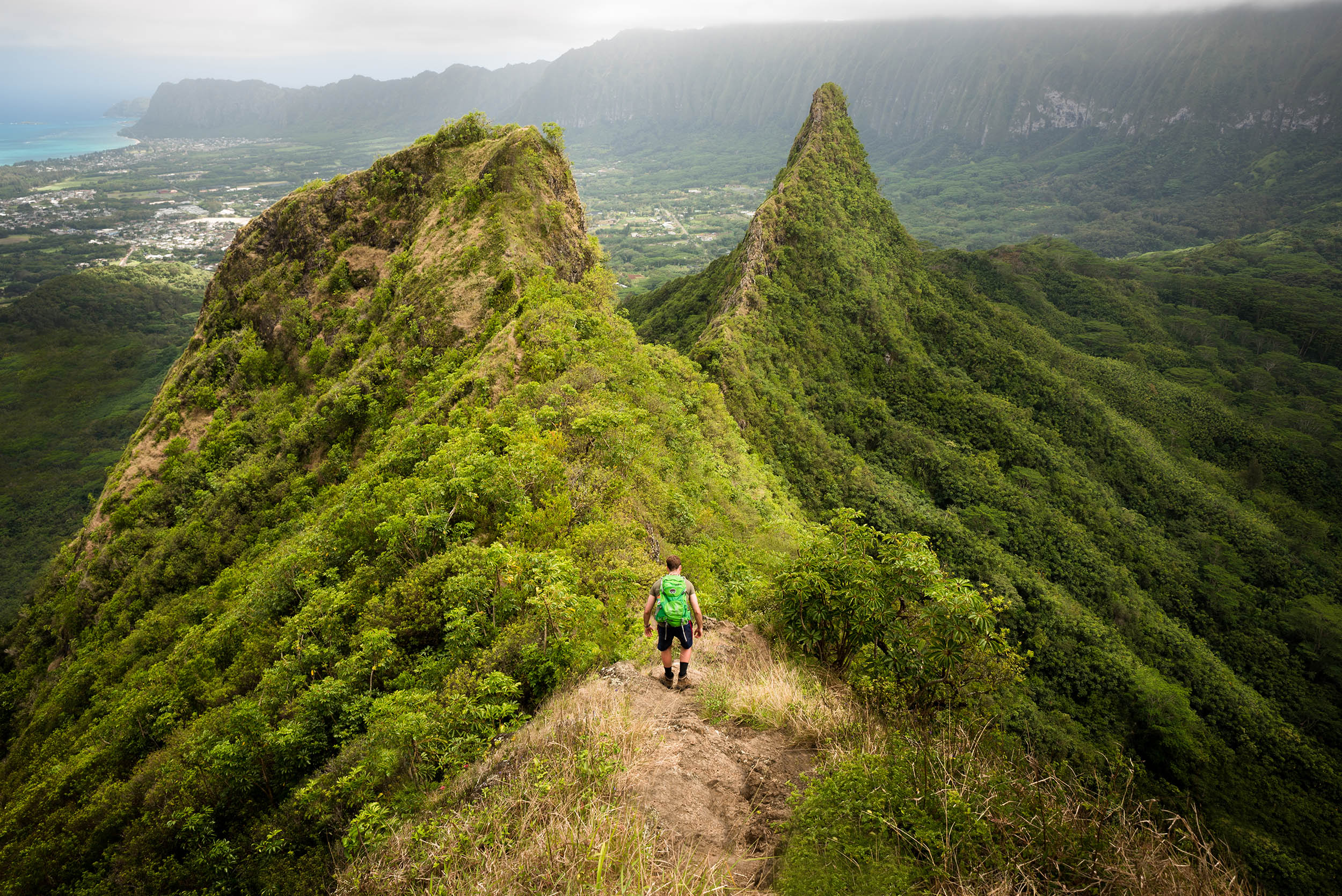 Difficulty: not for parents

Each Peak gets progressively harder, more difficult and more dangerous.  The last one of the three actually gets pretty nuts... Our hiking group started out as four.  We lost one after the first peak, then right before the summit of the third peak, a member of our group froze up.  The third of the three peaks is definitely not for those afraid of heights.

The hike to the first peak is the most laid back, a cool stroll through the jungle with some tricky, steep rock climbs at the end that older parents would probably have a hard time with.  The top of the first peak is where most people stop.  The bold move on to peak number two.

The climb down from peak one to peak two is where you start finding the sketchy stuff.  The hike immediately begins by scaling down some steep cliffs.  There are several old ropes to aid the descent, frayed and tied to a loose tree roots.  Several times you need to put your trust into these ropes and hope for the best as you climb down, hanging over steep cliff edges and large drop-offs.  It's a little tricky and slightly worrisome at first, but after a while and the 5th rope, it becomes the norm.. Scramble down some more cliffs and climb up some more ropes and you've made it to the top of peak number two.  The brave move on to peak number three.

Peak number three gets pretty crazy.  At peak three, the cliffs start getting a lot more narrow and the drop offs become deadly.  There are a few passes that require good footwork and scrambling skills where one wrong hold or a slip could send you over the edge.  Once you make it near the top of peak three, you round another steep corner and arrive at the final push.  Here it looks like a smaller version of Matterhorn.  The final climb is straight up a narrow cliff 30 feet high with only another frayed rope to trust your life to.  Pull yourself up this rope and you've made it to the top.  Just don't worry about how that rope was tied to a tiny nail in the ground which wiggled when I touched it...

Overall, this hike is pretty awesome, my favorite hike on Oahu (so far). 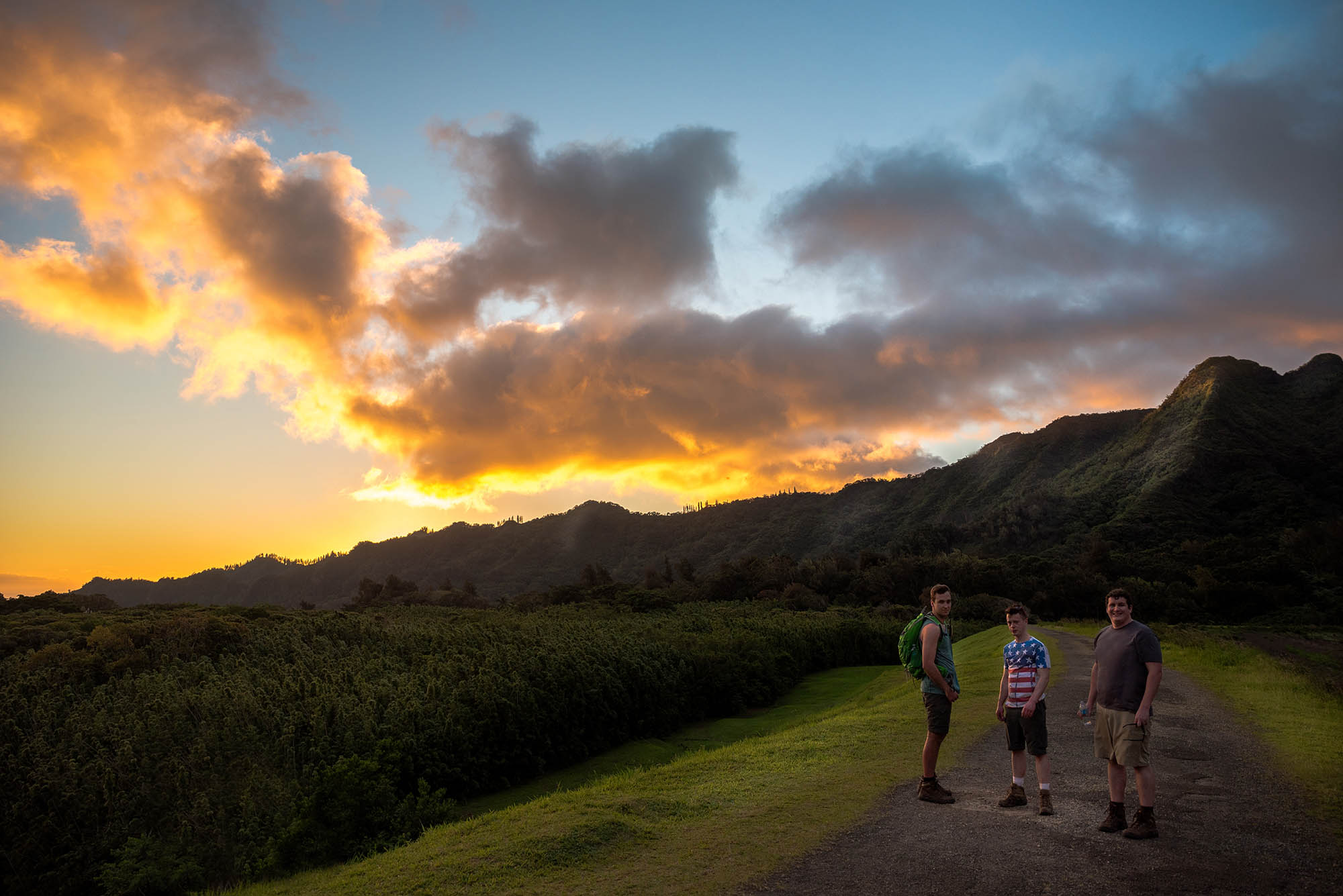 Our crew: my brother Michael, Cody and Colin 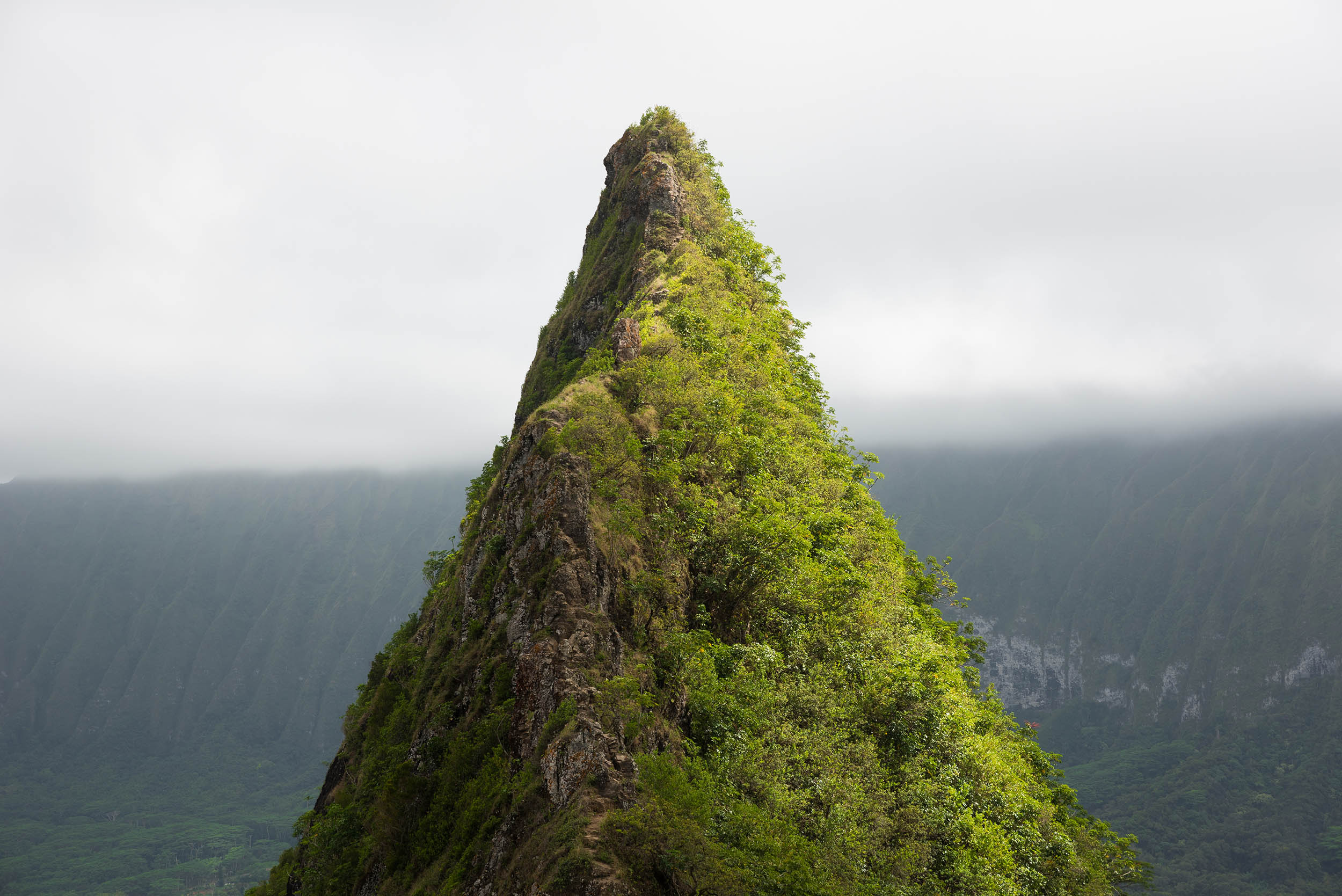 The third and last peak in the hike. 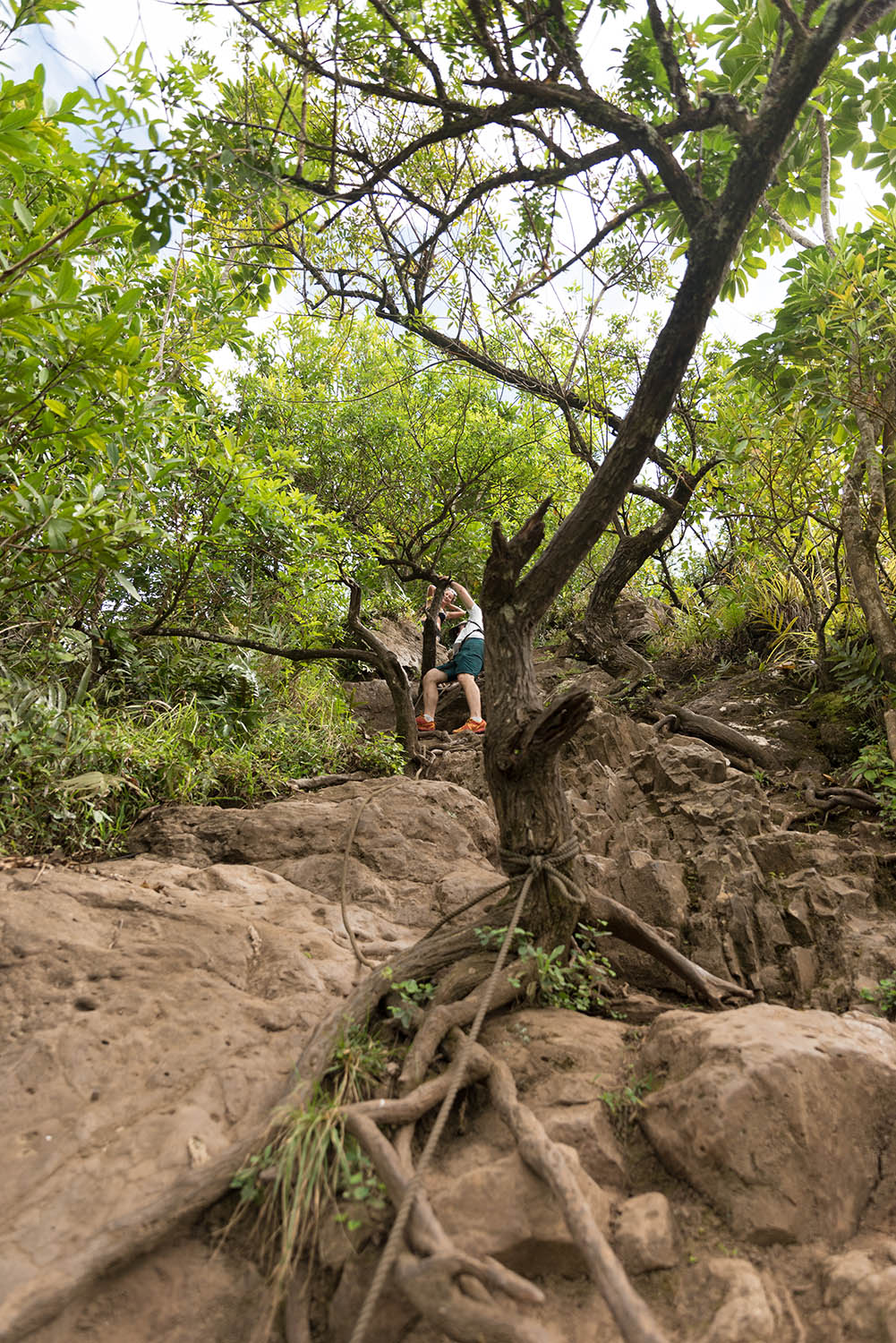 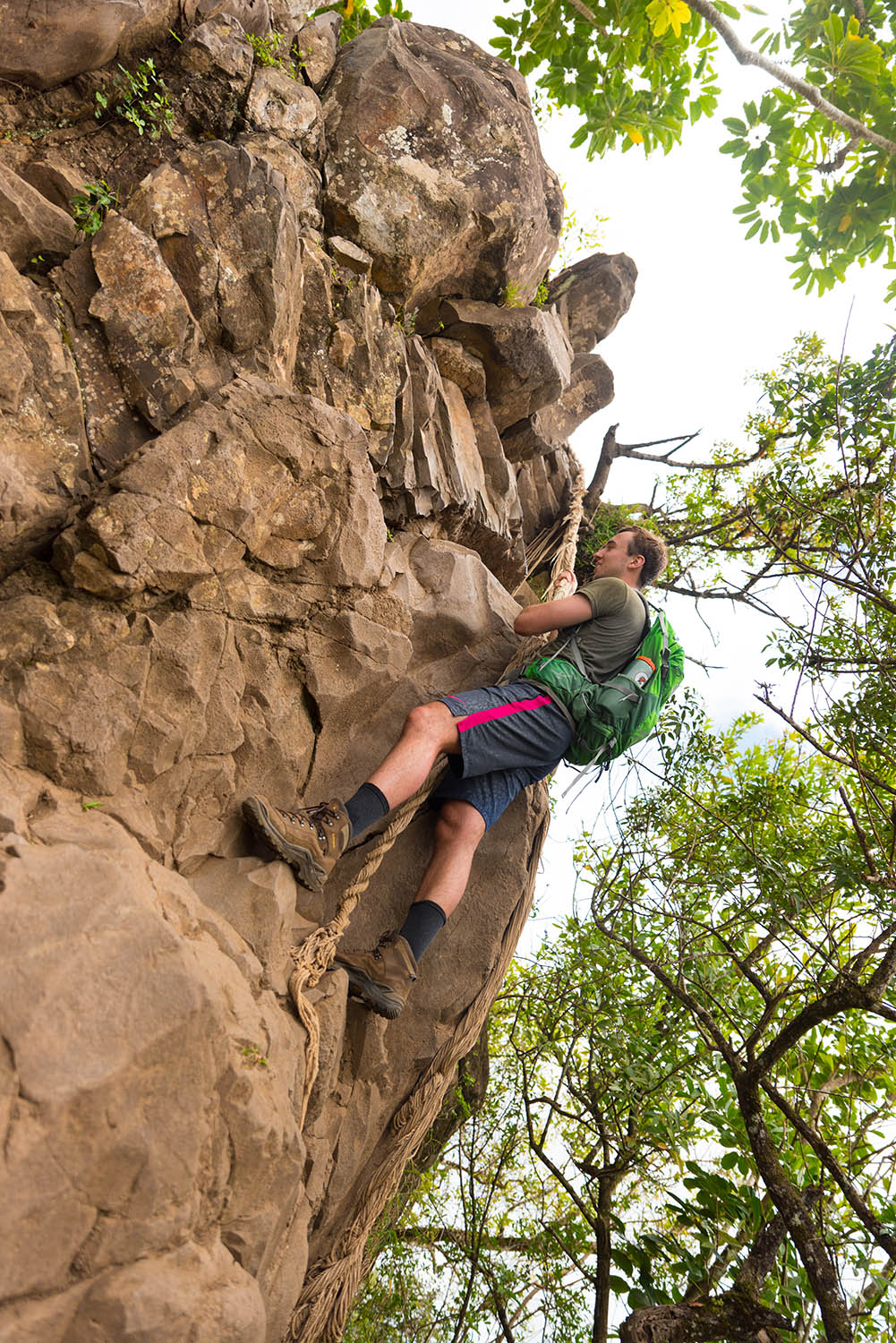 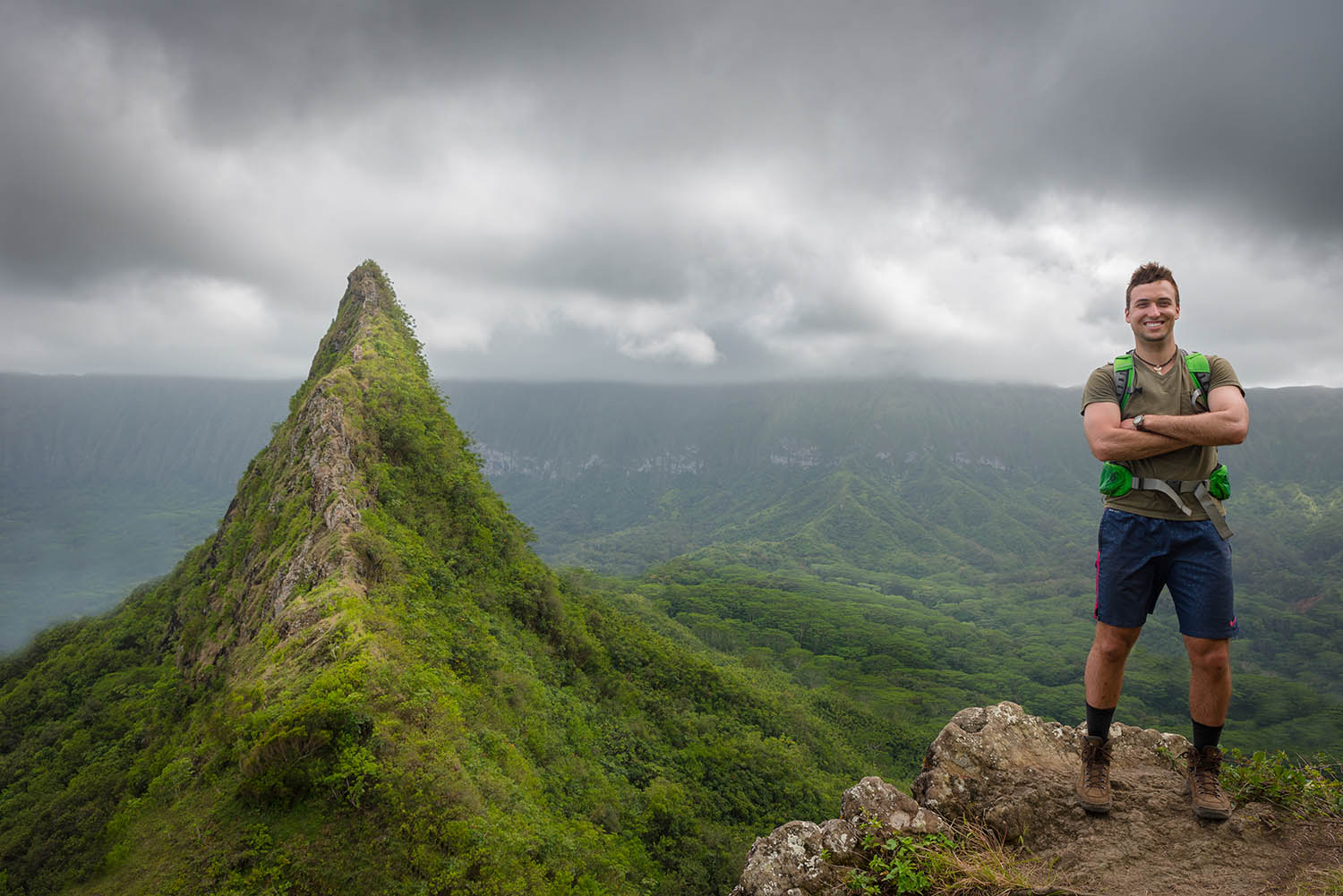 My brother Michael pretending to be buff after the daunting climb. 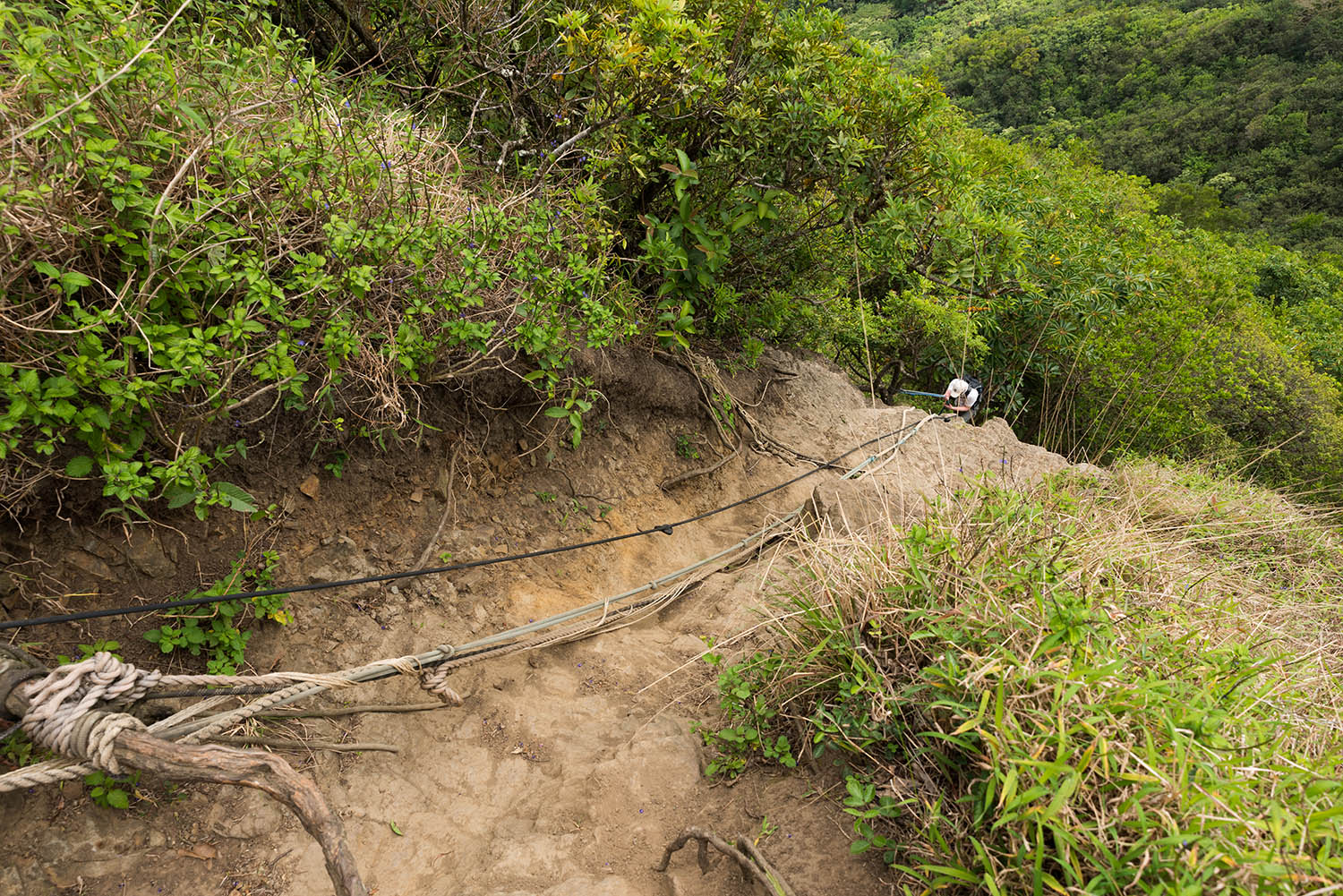 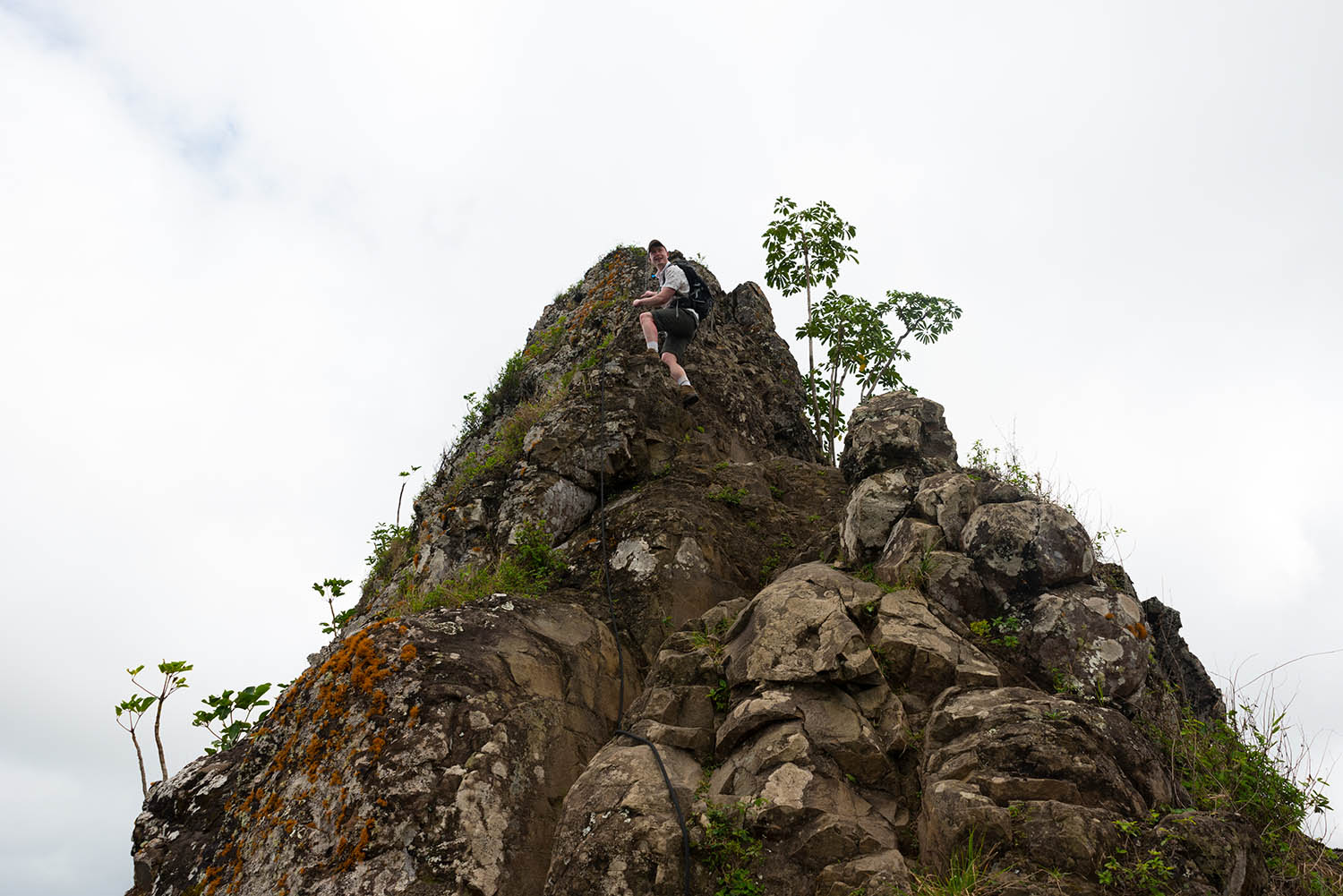 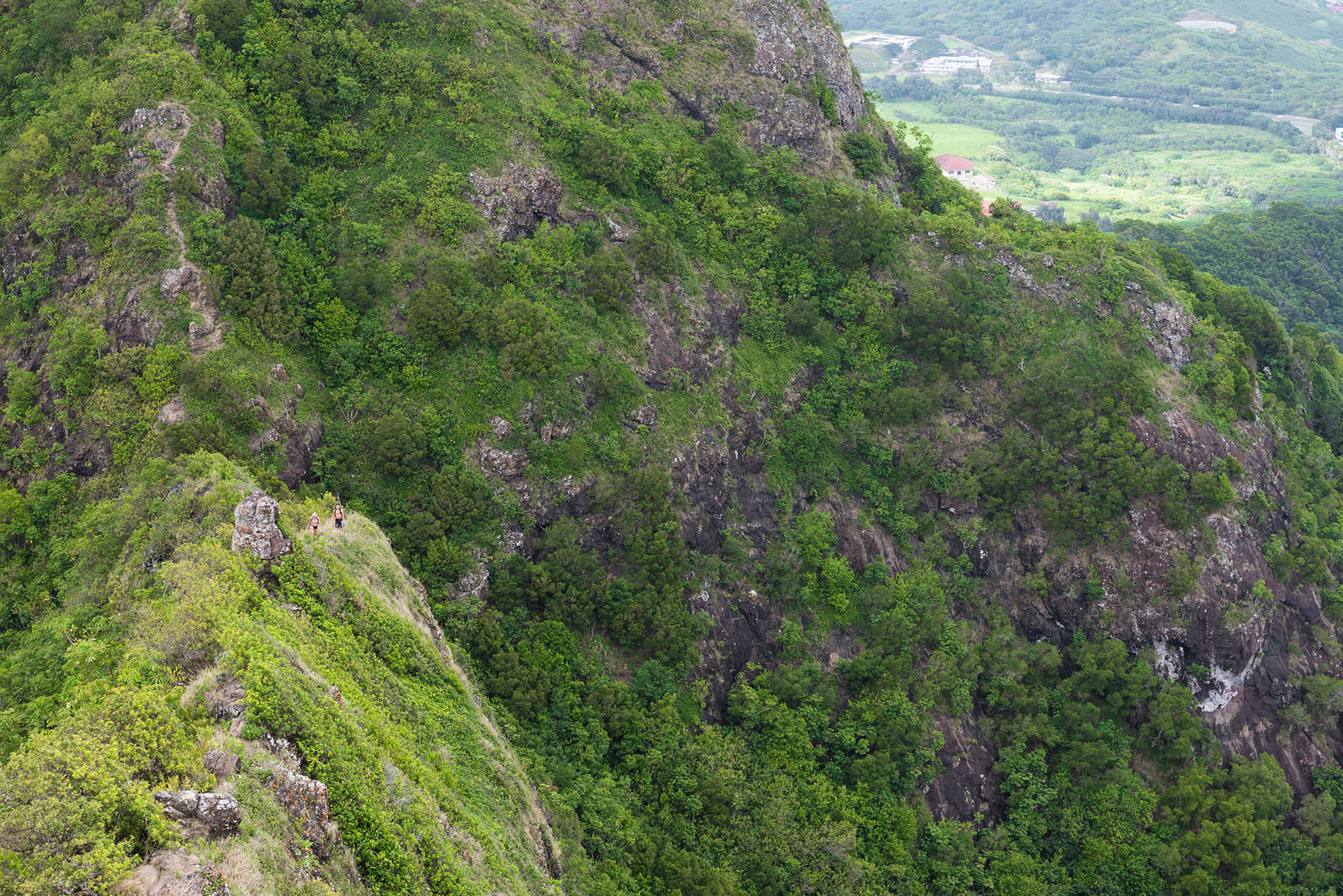 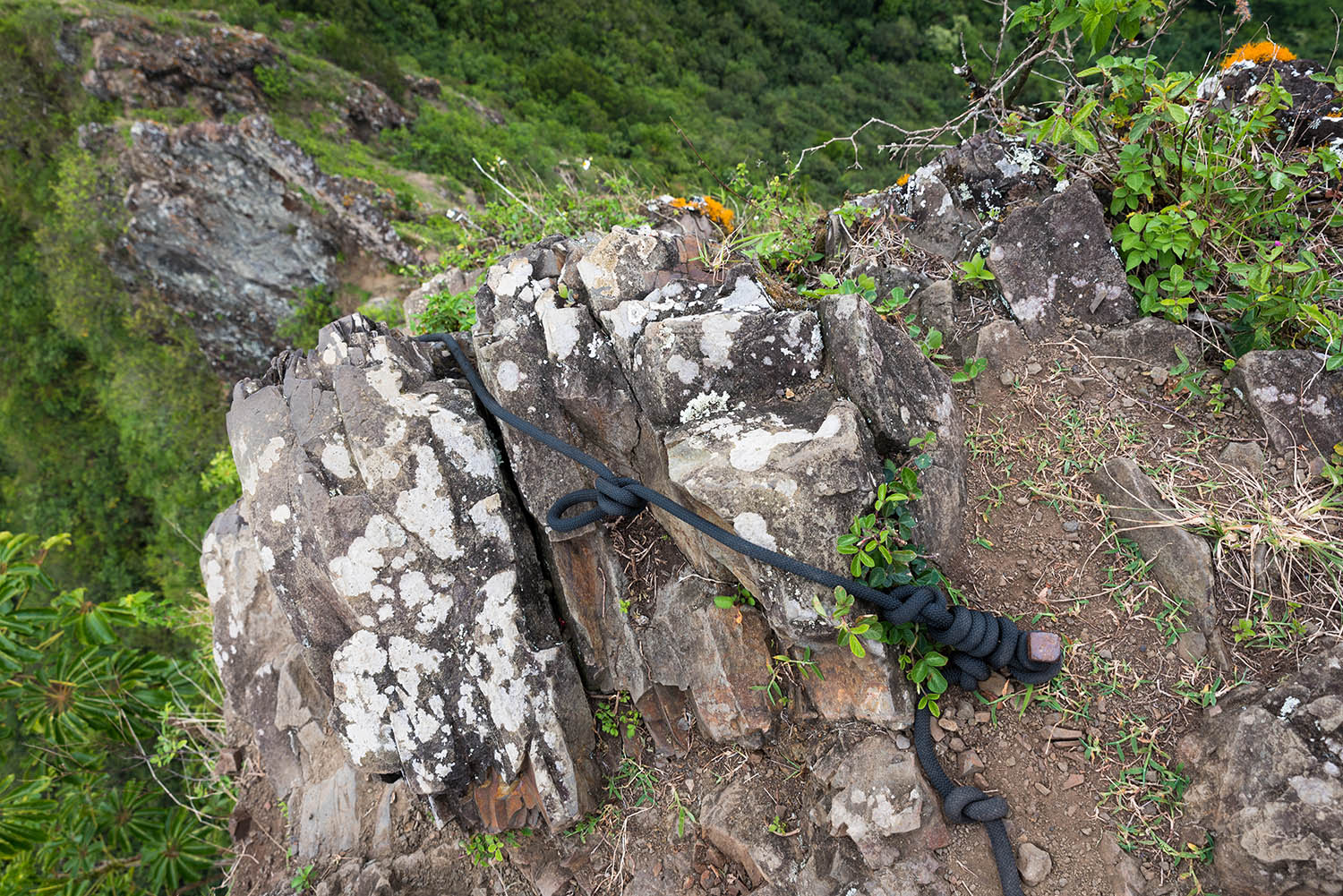 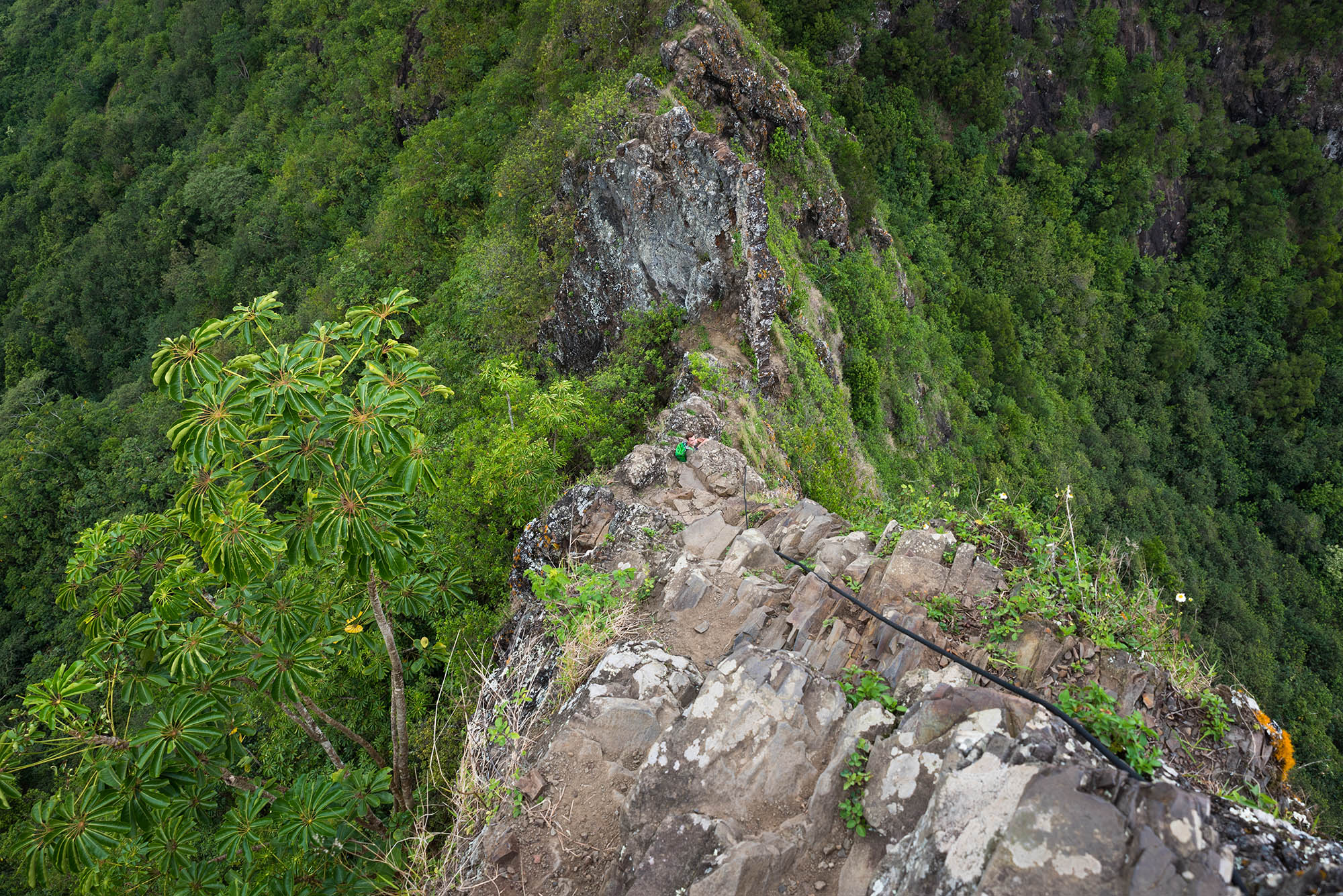 What do I need to bring to three Peaks as far as a packing list goes?
You don't need much to climb Three Peaks, just arrive pre-hydrated and ready for a semi-long day hike.  If you're only planning on going to the top of the first peak, you don't really need to bring anything at all.  I would definitely suggest wearing boots, though.  I had a backpack with 3 bottles of water, my camera stuff, maybe a hat or long sleeve shirt if you're prone to sunburn.  Definitely wear shorts, the hike gets pretty hot.
My New Camera:  http://amzn.to/2oPOUCw
My Boots:  http://amzn.to/2oWtxfQ

Is Three Peaks hike scary?
The first peak is no problem.  Peak two gets pretty sketchy.  Peak three a member of our group froze up and stopped.

Is Three Peaks Hard?
Climbing to the third peak you need to be athletic.  Good arm strength and climbing skills will help you out a lot.

Is Three Peaks Hike Dangerous?
There are sections that you can't afford to fall from, or you will die.

Do pictures accurately represent Three Peaks?
No, In real life, 3 peaks is a lot bigger and more intense than it appears in the pictures.

What is the technical name for Three Peaks?
Olomana Ridge.

It was a little confusing for us to figure out how to get to Three Peaks (Olomana) Trail, so I made you a map.

First off, you can't park at the Three Peaks Trailhead.  You must park a half mile out, on the side of the road, and then walk in.  You walk East, then South, through a country club gate and down the road a ways until you reach the trail head.  The trailhead is slightly noticeable with a small sign.  Be careful of where you park, we got a parking ticket because one of our tires was "on a sidewalk."  There definitely was not a sidewalk there...

Park, then walk East then South down "Loop Road" until you reach the Olomana / Three Peaks trailhead

Climb the Stairway to Heaven

The beach from another planet

The Land of Ice